Time to Grow Up 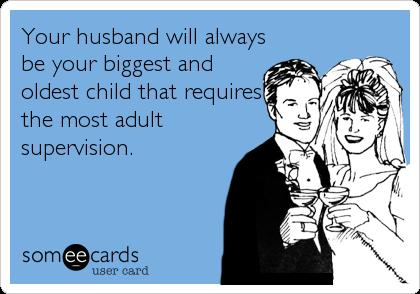 For the love of fuck, kraken-lovers, you know much I adore Facebook but there are times when I want to track down Mark Zuckerberg and tie him to stake forged from mousemats before driving sharpened chip forks through his scrotal delights. That’s because in recent weeks Facebook has been infected with one of those cyber postcards complete with vintage image and an alleged truism. Now there are some people who will no doubt claim that what I am about to rage over is “just a bit of fun”. Thing is, I’m laughing like roadkill as it takes its last breath because at the heart of this postcard is the reason why there’s a 19 per cent pay gap. That’s right, it’s the bilge that reads, “Your husband will always be your biggest and oldest child who needs the most adult supervision”.

Now, if you have put this on your own timeline and also consider yourself a friend of mine I’ll be optimistic and assume that you’ve perpetrated this heinous act with a sense of humour/ irony/ sarcasm because you are inherently understand why it is the verbal equivalent of chaining women to a family sized bottle of Domestos. However, if you don’t fall into that category and have posted this card seriously, with an indulgent giggle while patting your husband on the knee, this would be a good time to step away from the blog because I am about to take you down. And when I say down, I don’t ever really intend for you to get back up again.

That’s because for any adult, sentient woman to agree with the statement that “Your husband will always be your biggest and eldest child who needs the most adult supervision” defies my comprehension to the point that my cerebral cortex weeps tears of broiling spinal fluid. It’s a statement that , in the space of sixteen words, tells women that they’re only good for mollycoddling men while it tells men that no one expects them to pull their domestic weight because they are idiots and, equally, there are idiot women queuing up to do that for them.

You see, to agree with this cyber card is to accept, as a woman, that you are happy to have an inequal partnership. That’s right, instead of spending the rest of your life with a man who is your equal on every level you are instead signing up for a relationship where you prefer to treat said man like a toddler with a growth hormone problem. Way to go in upping the creep factor, ladies, because nothing is a greater turn on than being married to someone who is still incapable of spotting his own skid marks. Who needs foreplay when, in the minutes before insertion, you’re ironing your husband’s shirt? It’s no wonder that women still get lumped with the majority of domestic chores, because those women who have posted this card on their timelines are positively desperate to turn their men into foaming incompetents and themselves into their bloody keepers.

Although, don’t get me wrong. It’s not just the women who concur with this curly turd of verbage who are the problem. It’s the blokes too. That’s because any man who is incapable of caring for himself in the marital home should either be hospitalised, imprisoned or given the aforementioned Zuckerberg treatment. Look at it this way: one way or another men run conglomerations, governments, war committees, justice systems, space stations, laboratories, banking systems, academia and entire cultures. They hold such power over social systems that women are still blamed for their own rapes and girls are still only valued for the pertness of their tits, defying the needs and wishes of over three billion – BILLION – females. Yet upon marriage, for some reason that biochemistry has yet to fathom, they are incapable of filling dishwashers and recognising dust. Funny, isn’t it, how women are suddenly naturally brilliant and all the things men don’t want to do.

I’m not for a single second saying that all men are like this. Conjugal Kraken wields a wooden spoon and a box of Daz like David Blaine does a pack of cards. So do many other men I know. Thank fuck, I am surrounded by men who understand that if they can manage a department of minions they can also put out the bins. Yet for all of those men who chose not to – because they are capable really, they just don’t want to be – there is this postcard sparing them the responsibility of having to try. After all, if the women who have posted this card are so willing to treat them like children at home why should they ever bother to be anything else?

Worse, is the central conceit of this postcard: that there is some sort of stalwart pride in being a woman who is married to a faux-child and that to understand this and pander to it is something of which to be proud. After all, what could possibly be more fulfilling to a woman than the knowledge that their man simply can’t cope without them? I can even imagine the women posting this saying, “See? See what I have to put up with? But if I don’t make his sandwiches/ run his bath/ wash his socks whoever will? I do it because I love him!”

Spare me, will you? For the love of fuck, spare me. If you love someone you help them to stand on their own two feet. You don’t disable them with your own stupidity. If your bloke can’t wash his socks, bloody well teach him. And if he can’t make sandwiches he’ll soon learn if you let him starve. None of that will happen though, will it? He won’t starve. That’s because he too is an adult human and people with penises are equally as capable of domestic chores as people with vaginas. It’s not about gender. It’s about having a pair of hands and half a working brain. Yet after decades of persuading women that cleaning and marriage are what they are good at, it’s easier for women to believe that this is what they should do too.

So why does this postcard make me want to set fire to women more than it makes me want to set fire to men? Here’s why: women should know one fuck of a lot better. Do the women who like this postcard actually enjoy being inequal? Do they prefer to be married to a child rather than a man? Is this a situation that strokes their ego so much that they’d choose the status quo over anything that treats them with respect? I genuinely thought that, in 2014, women were more switched on and far less willing to be victims of their husband’s laziness or faux-ineptitude. Then again, after being told that there is some sort of enlightenment to be enjoyed at the end of forty years of bowl-scrubbing, what else should I expect?

That’s why this is my advice to women: if you want a child get pregnant, not married. Then you can really indulge that ego with arse-wiping, nose-blowing and meal-making while retaining your dignity as a sensible human being. It’s got to beat treating a hairy-balled 40 something like he’s never seen the colour red before sending him off to a multi-million project management job where he can laugh about you cutting off his crusts for him. If we women really do want equality we need to start with the bread bin. You know that saying that an Englishman’s home is his castle? Well it’s a woman’s castle too and unless she wants to reside there as a servant she needs to set fire to that fucking postcard.

What do you think of this post?
Fucktastic (42) Interesting (0) Meh (0) Boring (0) Shite (6)
This entry was posted in Uncategorized. Bookmark the permalink.

One Response to Time to Grow Up