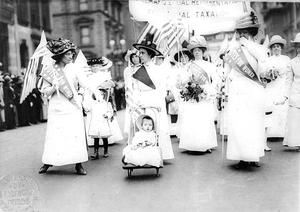 Tell you what, kraken-lovers, you’ve just gotta love Nadine Dorries. She’s the gift that keeps on giving because just when I think she has run out of surprises she leaps out at me from any given nook with even more reason to take to this blog. Yesterday, though, she was particularly generous because she used a blog post to wail about how her being investigated by the Independent Parliamentary Standards Authority over alleged expenses irregularities is the same as the plight of the Suffragettes. OK. And breathe…

What in the fuck is going on with Dorries? Has she been shooting up bong water? Well, she must have been because these suffragette-based comments are so despairing that they make me want to steal a horse and fucking well gallop over her myself. See, Dorries believes that the investigation into her expenses is a smear campaign because she appeared on I’m a Celebrity…Feed Me Koala Nads! And, get this, because she is a woman and a single mother.

In fact, she bleated: “Because a woman died under the hooves of a horse in the quest of female emancipation and because IPSA impact upon every single parent who is or wants to be an MP and because I refuse to allow a money hungry quango to compromise my right to work, be a mother and a pet owner, I am not allowing IPSA to get away with this.”

No, Dorries. Just no. Whatever the fuck else you do, comparing your skirmish with that of the Suffragette movement is like comparing a stubbed toe with the trials of a double leg amputee. Seriously, until the IPSA starts dragging you down the street by your ankles, tearing at your underskirts, locking you in a rat-infested cell and force feeding you by shoving a fat rubber tube down your throat you are about as far from the Suffragette movement as John McCririck on a stag night.

Worse, Dorries is playing the gender card, like a true squirming MP. But if she’s being fingered by the IPSA it’s because there’s possible financial fuck-uppery, not because her body houses a uterus. And if she is being harassed after appearing on I’m a Sleb… it’s because she pissed off to the jungle for a month rather than doing what she is paid to do in her constituency, not because she’s familiar with the business end of a tampon.

See, the unfair treatment she claims she is receiving is exactly what I’d expect her to receive, not as a woman but as an MP who abandoned her constituents and as a professional who may have cadged tax-payers’ money for personal expenses. And if she was a he I have no doubt that he’d get the same amount of suspicion and derision chucked at him too. If Dorries thinks she can run off with Ant n Dec to scoff bulging grubs on company time but then bark about equal rights when she gets called-out she can, quite frankly, go screw herself.

When Dorries squawks about her rights as a woman she’s actually taking a mahoosive dump on every other woman in the country. Instantly she makes women who shout about genuine inequality look like shrieking harpees who will holler misogyny at any given opportunity. Yeah, yeah, I know the Commons and Lords are hotbeds of sexism but Dorries turning that to her advantage just because her own behaviour is biting her on the arse is offensive, not just to the women’s movement generally but to those women who fight sexism every bloody day.

So until Dorries can prove that her gender lies at the heart of this kerfuffle, my mind will translate every word she says as utter bollocks. This isn’t about not listening to a woman who is genuinely struggling with misogyny. It’s about not listening to a woman who uses the struggles of others to cover her own arse. If Dorries thinks the Suffragettes fought for her to do that then the jungle is exactly where she belongs.

What do you think? Is Dorries a victim of herself or misogyny? The comment box is just dying for you to visit it…

What do you think of this post?
Fucktastic (14) Interesting (0) Meh (0) Boring (0) Shite (1)
This entry was posted in Culture, Public, Sleb, Uncategorized and tagged misogyny, women. Bookmark the permalink.

One Response to Suffragette Shitty