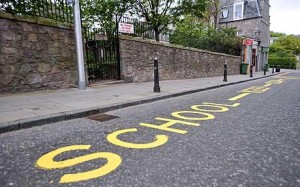 You know, as much as I write about the foaming idiocies of society’s knobscots and wank-handles it’s very rarely that I actually come into physical contact with them. Indeed, over the years I have done a remarkable job of surrounding myself only with people who are more likely to feed me cake than make me kill. That’s why visiting Kraken Junior’s school is so distressing. No, it’s not the kids or the teachers who make me shit pebbles of solidified spleen juice. It’s the pox-brained, mouth-breathers who insist on parking their cars on the fucking zig zags.

I don’t know what it takes to be such a scorchingly selfish sac of catheterised vole flobber but the parents parking on the zig zags at Kraken Junior’s school have it in fucking boat-loads. It’s as if, because they are wrenching their offspring from last class and want to go home, the Highway Code no longer applies to them. So while the rest of us parents are desperately scouring the road for parking spaces this group of piss-biscuits think the zig zags are little more than personal parking bays.

What a clusterfuck of human organs these people are. Not only are they so far up their own arses that they’ve perforated their own bowels with their teeth but they have a staggering disregard for the children attempting to cross the road once the school bell has rung. But hey! Why should they give a shit? At least their own offspring are safe, well and promptly picked up from school. Fuck all of the other parents who have to negotiate spaces or witness their children dodging cars like a real-time game of Mario Kart.

Oh, and when my mother, Old Ma Kraken, recently challenged a grandparent at Kraken Junior’s school for parking on the zig zags before wandering into the yard she was told, “It’s OK. The zig zags are in the wrong place anyway.” Excuse me? So because this particular individual thinks that the zig zags are in the wrong place it’s Ok for her to park on them? Well I’ll be fucked if I ever want to see her negotiate a roundabout that’s “in the wrong place” then. I suspect she’d just drive over the top of it, stoically ignoring the pile-up in her wake simply because she knows infinitely better than the local council’s highway department.

And that’s what distresses me the most about parents who park on the zig zags: it’s a supreme act of selfishness. You see, even though they want their kids to be brought up in a society that extols respect, responsibility, patience and sharing, none of those attributes actually apply to them when they treat those yellow lines the way they do.

More than that, they are teaching their own kids that they are the only people who matter. In fact they will think nothing of the dangers of traffic to the small reception class children running out to their parents, as long as their ten year old is merrily grunting in the front seat of the car and scoffing his crisps.

Seriously, I have such trouble understanding what makes parents so selfish that on the times I have attempted it I’ve almost swallowed my own tongue. Look, none of us wants to twat about looking for a parking space, walk half a mile to get to the yard or receive such a soaking from downpour that they go home with trench foot. Yet all of that has to be infinitely better than living in a society where at 3.15pm on Monday to Friday it’s every fucker for himself.

More than that I have no intention of ever teaching Kraken Junior that it’s OK to socially kick other kids in the bollocks for nothing but her own convenience. See, something tells me that these zig zag-shagging parents would be the first to trample the Head’s office if their progeny got picked on or failed to get the lead in the fucking Nativity play. Yet their inability to understand that other parents want their kids to be treated fairly too must mean that they are physically missing the portions of their brains that control empathy, decency and the ability to see further than their own twisted egos.

Which means that if these people cannot police themselves then I’m happy to do it for them. I shall buy parking tickets from the must-see website You Park Like a Cunt and distribute them like academic confetti. Believe me, if they want Kraken Junior’s school to be an educational establishment then I’m happy to take that education onto the street. Only there won’t be any fairness, there won’t be any standards and I’m guaranteed to make punishment corporal.

What do you think of this post?
Fucktastic (25) Interesting (0) Meh (0) Boring (1) Shite (1)
This entry was posted in Culture, Parenting, Personal and tagged drivers, parking, school, zig zags. Bookmark the permalink.