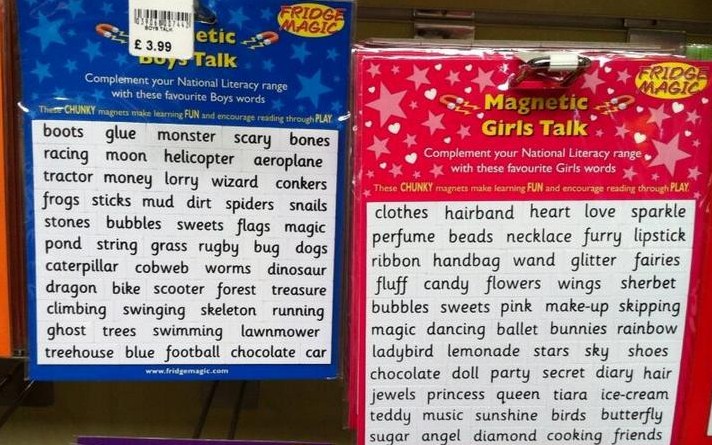 What in the shrinking ballsack of sexist Satan is this? You see, a couple of kraken-lovers have assaulted me with a picture that has only hitherto been found in the Oxford English Dictionary under the definition of ‘arse-seepage’. In fact, if you look up there (try to imagine me pointing like a panicking air steward) you can see it yourself. It’s two sets of magnetic words for kids who are learning to read. The only problem is that there are two of them because, apparently, boys and girls use different bloody words.

You have to be shitting me with this. When I first saw it I peered at it like a pervert through a letterbox in the hope that it had been photoshopped. It hasn’t. It’s real. In fact, just in case you’re not already backing away from this blog post with all-consuming horror let me give more details. The words for boys include ‘bones’, ‘running’, ‘skeleton’, ‘string’, ‘treehouse’, ‘money’, ‘grass’, ‘moon’ and, for some really ballsed-up reason, ‘lawnmower’. Clearly, though, these are lost on anyone in possession of a muff because the words for girls include ‘perfume’, ‘handbag’, ‘wand’, ‘cooking’, ‘clothes’, ‘bunnies’, ‘sherbet’, ‘sparkle’ and – for fuck sake, take a breath for this one – ‘fluff’.

Worse the blurb on the packet says that these word collections “complement” national literacy. Yeah, in the same way that letting drivers swig gin complements road safety. Seriously, how in seven shades of shit are these magnetic packets of evil complementing anything but the notion that girls and boys have such wildly differing vocabularies that the English language actually needs to be segregated.

Is this really how wildly out of control that sexism has become, that teaching kids to read is now about addressing their genitals rather than their brains? No wonder teachers are knackered and jumping off bridges. It’s because, according to the maggot-addled spaff-weasels behind these magnets, they have to give boys and girls entirely separate English lessons, just in case boys develop, I dunno, confused sexualities over seeing the word ‘tiara’. And fuck knows what the word ‘swimming’ could do to a girl’s sensibilities.

In fact I have no idea why these magnetic words haven’t gone even further. May I suggest that if the manufacturers decide to reprint some of these magnets they could include the words ‘smelling salts’, ‘doilies’, ‘virgin’ and ‘fainting’ for girls along with ‘cad, ‘bounder’, ‘gadzooks’ and ‘handlebar moustache’ for boys. Fuck knows, there’s even a market for segregated dictionaries, just in case girls get it into their head to read about ‘conkers’ (another magnetic delight) and need to go back to their ‘fairies’ (and another).

Who in the swelling gonads of piss-covered squirrels actually comes up with this stuff? Seriously, you could give me a ten year deadline to make a new toy for children and it wouldn’t cross my mind to draw an enormous dividing line through the English language. Then again I probably wouldn’t work for a company that, ironically, has such as nasty grasp of English in the first place. Go on, take a look at the packets housing these magnets. The blurb takes such a massive shit on the use of apostrophes and capital letters that the manufacturers would be better placed teaching kids to scratch their own arses than to read.

Or perhaps these magnets are less about teaching kids to read and more about giving them an excuse for thirty years of therapy. I have only a fevered idea of what it must like to be a little girl who enjoys ‘running’, only for her to be told that it’s a boy’s word. And how boys must feel when their love of ‘lemonade’ turns out to be a girl’s pastime is beyond me.

All of this means that I’d like to produce a word collection of my own. Apart from the obvious four-letter efforts it would scream ‘cockwomble’, ‘par-boiled puss bucket’ and ‘giant fuckwad’. Oh, and you can forget about these words being on magnets. They’d be written ten feet high on the front of the manufacturer’s building. If they want to learn about the English language I really would be more than happy to teach them.

What do you think of this post?
Fucktastic (144) Interesting (4) Meh (3) Boring (1) Shite (8)
This entry was posted in Culture, Parenting, Public and tagged children, sexism. Bookmark the permalink.

40 Responses to Word Up