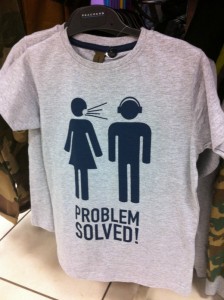 Pass me a cold poultice! I fear I may have exploded a frontal lobe and I need to contain the damage.  You see, a wondrous journalist and social media gnu otherwise known as Joanne Mallon waved the following flag of gender destruction in front of me yesterday and it was downhill all the way after that. In fact I momentarily lost my power of speech but, luckily, not my power of hitting a keyboard with my forehead which is why that pic b’there, of a t-shirt currently being sold in Peacocks, is about to have the shit blogged out of it.

Go on, take a look at said garment. Sold in the boys’ section of Peacocks it’s a motif of a male being shouted at by a female, while said male blocks out the noise by jamming his ears with headphones/ earmuffs/ a Princess Leia wig. Underneath is written the phrase “Problem solved!” It’s simple but it says everything you need to know about why boys are growing up to be men who think that women are surplus to requirements any time they are doing anything other than offering up their vaginas. Classy, Peacocks, classy.

I have no idea how this actually made it onto the Peacocks shop floor. Not only did someone in Peacocks HQ think it was a good idea to pimp this message to the yoof of the nation, but they then distributed it to its 400 stores. You know, just to make sure the wild sexism that the t-shirt represents was evenly spread across the nation. God forbid that there should be pockets of equality near, say, Carlisle or Southampton. Similarly the powers-that-be at Peacocks thought it equally important that the mainly female workforce that inhabits its shop floors should be forced to display clothes that call them bleating harridans. I have no idea what morale is like for the Peacocks chain but doling out those tops would have made more than one female sigh into her payslip.

Thing is, it doesn’t matter how I try to interpret the t-shirt, I keep coming to the same conclusion: that Peacocks is telling boys that women are to be ignored. Perhaps it’s because Peacocks thinks women are nags what with them expecting their adult male partners to be able to load a washing machine or knock up a spag bol of an evening. Or perhaps Peacocks is merely telling the men of tomorrow that women have nothing important to say at all, that regardless of their opinion or expertise they need to be tuned out just like when Jamie fucking Cullum comes on the radio.

Either way, these t-shirts are taking such a massive shit on the mums, sisters, grandmothers and aunts of the boys who wear them that those women are virtually scraping manure from their hairlines. And yes, yes I know it is supposed to be funny and yes, yes, you might think I need a sense of humour but come on. If these were t-shirts for grown men who knew better I’d want to put my foot through the nearest knackersack. Yet they are not. They are t-shirts for impressionable boys who are so relentlessly determined to be cool that they’ll wear anything that raises a laugh, even if that laugh is at the expense of half the population.

More than that I would love to know who buys these t-shirts in the first place. If they really are for boys then I assume that they need to be bought by adults because it’s they who have the cash. I hope to fuck that no woman would shell out the cost of this thing, not unless she’s happy for said boy to tell her to fuck off when he’s 15 because he’s been taught that she’s not important.

Which makes me wonder what sort of boy would want to wear this in the first place, unless he wants to appear as thick as pig shit. It hardly portrays him as having an intelligent, erudite, inquisitive and open mind, does it? Fuck no. It does, though, portray him as being so short sighted that he can’t see further than his barely-dropped bollocks. Oh, and as someone who will have as much appeal to a future girlfriend as a stampeding case of thrush.

Which is why Peacocks should allow its female employees to tear this t-shirt from its stores before burning piles of them on bonfires in the staff carparks. In fact, I’d encourage said women to dance naked around the flames while chanting, “Now ignore me, you fuckers!”. If Peacocks wants to silence women its already lost because t-shirts like these just make us shout louder.

What do you think of this post?
Fucktastic (25) Interesting (2) Meh (0) Boring (2) Shite (4)
This entry was posted in Culture, Parenting, Public, Sexism and tagged Peacocks, t-shirt. Bookmark the permalink.