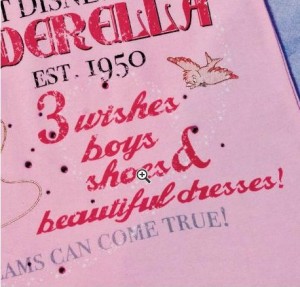 What in the giddy fathoms of fuck is this? Thanks to a merry band of kraken-lovers I have been sent details of a product that is available on the website of trinket-floggers Argos. Thing is, before I tell you about said product you need to be warned that I have become so hysterical with rage that the rest of this blog might set fire to your eyes. Ready? Got your shades? Good.

See, Argos is pimping a pack of two Disney t-shirts for 3 – 4 year olds girls. So far, so blah. Thing is, each t-shirt contains what looks like words but is actually distilled horseshit that’s been scrawled with the use of a rotting lollipop stick. One reads “I like boys but I like shoes more” and another reads “Three wishes: boys, shoes and beautiful dresses”. No, I’m not shitting you. Not one tiny bit. If you want to see this modern depiction of Satan’s arsehole for yourself you can click here.

What in the fuck is Disney, and then Argos, thinking? Now I know that these t-shirts carry the ubiquitous princess theme and therefore, by definition, have to resemble an inflamed cervix while spewing the message that all women need to be saved by a prince with a stiffy. But at what point does any adult human think it’s a good idea to inculcate little girls with the notion that all that matters in life are blokes and daps?

Seriously, if these were the last items of clothing on earth and my daughter was perpetually naked and freezing I wouldn’t bloody buy them. I’d rather swathe her in cheap toilet tissue than let her carry across her chest the moral outlook of Anthea fucking Turner. Just at the age when little girls are discovering the world – of which Disney should be a magical, imagination-soaring part – the world tells her that unless she’s shagged and shod she’s nothing.

Does Disney actually think that it’s healthy to turn three year old girls into sexualised boy-chasers? That small girls, who don’t yet realise that they have their own foof, should be parading an enforced sexual proclivity? If so, then why in the frig is it stopping at t-shirts? Perhaps it should start knocking out little girl lingerie for a princess-like wedding night or flowing maternity dresses so that toddlers can shove cushions up them and pretend their carrying the heir to the fucking throne.

It’s already worrying enough that girls have the princes theme foisted on them at every turn. Look in the clothes aisles, magazine racks, toy shelves and even the bloody cake aisles in supermarkets and there’s sod all but princess-themed tat. And yeah, some girls adore that stuff but the problem is that there is no room for those girls who do not. If your daughter doesn’t want to advertise Aurora and Rapunzel she’s roundly screwed. And now, thanks to Disney, she has to become a tiny cock-magnet too.

I find it stunning that this stuff has actually hit the high street because you’d think that at some point in the production process someone – an employee of Disney or Argos – would have hollered about how inappropriate it is. Don’t modern parents actually work for these organisations? And if they do, would they allow their tiny daughters to dress like this?

I genuinely have no idea who would ever put their kids in this turdage.  It would actually break my heart to see Kraken Junior wear one of these t-shirts because all I would see is a bright, inquisitive, hopeful, gender-blind five year old wearing the sicko, outdated notions of a woman’s place like a sandwich board. How bleak is that? Not only does Disney get to thrust its stereotypes on the world but it actually uses little girls to advertise them. Hey! Disney! Why spout sexist hand-wank at board meetings when you can get tiny children to spout it for you!

So, no Disney. You, like a dirty old pervert waggling his cock on the top deck of a bus, are no longer coming near my child. She’ll be brought up to know that she is better than your creepy standards for women and that she is worth more than just an attachment to a man. You can take your princesses and lock them back up in their towers where, with any luck, we will never, ever see them again.

What do you think of this post?
Fucktastic (46) Interesting (0) Meh (0) Boring (0) Shite (2)
This entry was posted in Culture, Parenting and tagged argos, children, disney, sexism. Bookmark the permalink.

7 Responses to Top Off