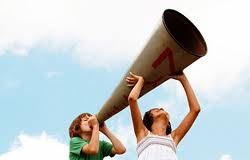 Look, even though it’s five years since I witnessed the gore-splattered apocalypse of my love tunnel, otherwise known as childbirth, I am still staggered beyond reason at how mothers aren’t allowed to have individual thoughts and feelings. I have seriously lost track of the times I have spoken the truth about parenting only for someone to try to shush me into submission, for fear I’m indulging in some twisted gender-based dissent. So in an effort to make those someones shit nails of frozen panic, here are the aspects of parenting I’m supposed to be ashamed of… but am not.

Crying for the first five months of my pregnancy: No, not with joy you giant knobscot, but with crushing grief. That’s because contrary to popular belief not all pregnancy testing kits come with party poppers, although I could certainly have done with mine coming with a cyanide capsule and a list of ways to be creative with a bottle of paracetamol. Yeah, I slowly got used to the idea but not fast enough for those people who thought that I should resemble the beatific Virgin Mary.

Feeling nothing when my child was born: You have to be shitting me with this post-birth epiphany stuff, because the only thing I felt when Kraken Junior exploded forth was a stiff wind through the gigantic, raggedy tear in my biffins. Even when she was plonked onto my chest I asked what in the fuck I was supposed to do with a baby. Believe me, if there was a maternal glow it was chucked away with the stunned placenta and duly incinerated.

Not recognising my own baby: Come on, when was the last time you walked into a crèche of twenty infants and immediately identified your own? Really? Today? Then you’re going to love the fact that not once, in her crèche-based early years, did I recognise Kraken Junior when I collected her. In fact, I’d stagger towards the progeny of a complete stranger before being gently guided to my own. And even then she’d only be familiar because of the freakishly patterned romper she was wearing.

Drinking rum straight from the bottle: Fuck the glass. Or the coke for that matter. Just give me a gobful of Captain Morgan, directly through the neck of a bottle, at Kraken Junior’s bedtime precisely. Yup there have been times when the Cap‘n has put his arm across my chest in an effort to physically stop me committing the sort of act that would headline on News at Ten and I’m not ashamed to admit it. CBeebies Bedtime Hour it ain’t.

Smothering my own child: Oh, don’t look at me like that. I never actually did it but there were times during the 3am blistering blackness of my severe PND and PTSD when I wondered if, just if, I fetched that pillow and… And no that doesn’t make me a monster. It makes me a woman who was so desperate for respite, peace, sleep, food, happiness, a wash and a shit that didn’t tear at my stitches that I was open to even the bleakest of suggestions. Call Social Services if you like but all you’ll find now is me chasing Kraken Junior as I try to blow raspberries on the best little arse in the entire world.

Dumping Kraken Junior’s art work in the bin: Not just because the girl is prolific but because if I kept everything she scribbled, crayoned, painted and pencilled I’d feature on The Hoarder Next Door. That’s why there are days when, within hours of her proudly presenting me with a barely recognisable picture of a panda eating an umbrella, it finds its way into the bottom of the recycling bin. It’s that or having the coroner pronounce my death as ‘suffocation by Crayola’.

Enjoying my hospital stays: Look, in the last year I’ve had three IV-strewn holidays at the behest of the NHS and as ill as I’ve been I’ve also been imbued with a delirious joy at being able to lay still and read while not once being expected to find glue, make tea, pick crusty snot, explain tampons, dress teddy, read The Gruffalo, search for nits, holler “Clean your bloody teeth!” or attempt to remove the “black bits” from a Bolognese sauce. My next hospital stay is in November for major facial surgery and, frankly, I can’t fucking wait.

Still not knowing if I want to be a mother: Yes, there are still days when Kraken Junior runs into our bedroom and I wonder who in the fuck let that kid into the house. And yes, there are still days when I want to stick a pin in the departure board of our nearest airport before taking a one-way flight to the Hindu Kush. Then I see that little arse scamper past me and I’ll be fucked if I actually forget where my passport is. Raspberry, anyone?

What do you think of this post?
Fucktastic (31) Interesting (1) Meh (1) Boring (2) Shite (2)
This entry was posted in Culture, Parenting, Personal and tagged mothehood, shame. Bookmark the permalink.

14 Responses to The Real Thing

Leave a Reply to The Kraken Cancel reply