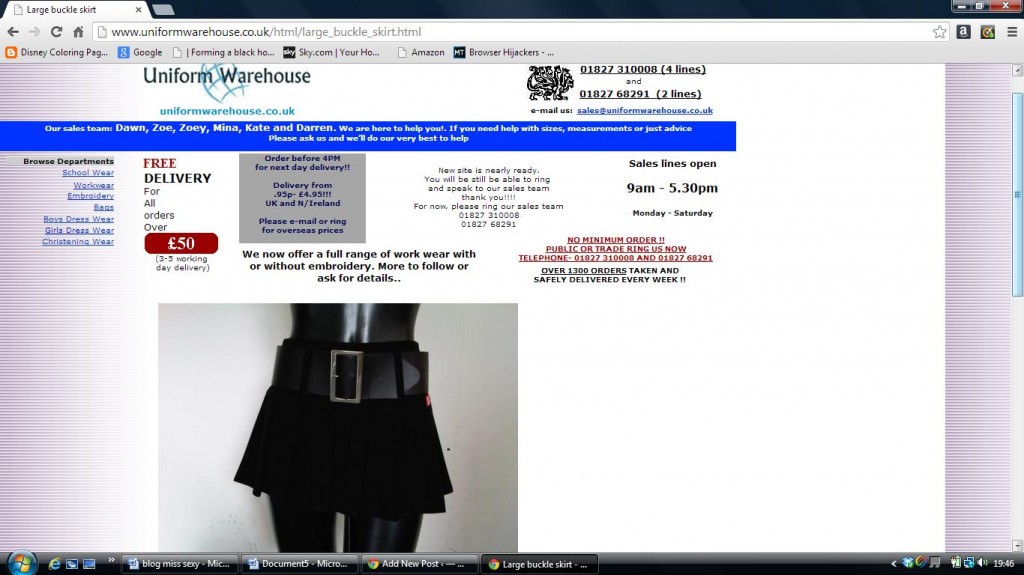 Tell me, kraken-lovers, did an alien race take a gigantic shit in the Earth’s brain in the night? I only ask because I’ve just seen a website that sells school uniforms touting what may as well be teenage girls to Stuart Hall. No, really. You see www.uniformwarehouse.co.uk does more than flog standard issue white shirts, PE kits and embroidered sweaters. That’s because it also sells a range of school uniforms for girls that are called – wait for it – Miss Sexy.

Go on, have a minute, just to take in that school girls are being sold uniforms that I swear have the same titles as some of the dildos in Anne Summers. And as if the title Miss Sexy isn’t bleak enough, you want to take a look at the clothes themselves. Clingy and leggy doesn’t cover it (the short versions of some trousers have a 30 inch inside leg, for fuck sake) because the range also includes the shortest skirts I have ever seen this side of the Amsterdam red light district and – stunningly for a selection of clothes that are supposed to be suitable for a sexually underage education – hot pants.

Seriously. Hot. Pants. Although I have no idea why the cock-fumbling, ball-cuppers who produce the Miss Sexy school uniforms bothered to stop there. They could have gone much further, producing regulation grey nipple tassels for year junior schoolers, edible training bras for girls going up to comprehensive and crotchless navy knickers for those girls who’re ignoring their GCSEs because they think they are only valued for their sexual availability.

Way to go, Miss Sexy, telling the women of tomorrow that their school years aren’t about harnessing their potential, intelligence and creativity but about making them as fuckable as it’s possible to be this side of their sixteenth birthdays. And, yeah, I know that girls are growing up faster than ever but that doesn’t man we have to drag them into adulthood by their ankles, does it? Otherwise why don’t we just accept that their male counterparts will one day be desperate for a shag before supplying year five with fruit-flavoured condoms?

And that’s the biggest problem with the whole vomited ouvre of Miss Sexy clothing: that it doesn’t just send a message to vulnerable and impressionable girls, it actually stamps the words Miss Sexy on their bodies. Look at it from the point of view of a fourteen year old getting ready for school in the morning. Instead of pulling on a jumper that reminds her of how she’s brilliant at maths or top of the class in English, she pulls on a pair of trousers that reminds her of how she is a piece of meat. So why bother, then, in her geography test or biology mock?

I like to think that teenage girls are more intelligent than we give them credit for and that they’ll see right through Miss Sexy. Yet, when the Miss Sexy message isn’t the only one telling them they’re valuable as nothing but sexual beings I start to shit my hot pants. It’s a fair guess that the life of the average fifteen year old includes magazines that offer blow job advice, the music of the ever-grinding Beyonce, Rihanna and Miley, make-up that makes them look pouty, boys sniggering over tit-pics and the explicit sexual imagery of t’web. Which is why Miss Sexy is so dangerous because it doesn’t just help uphold the sexuality enforced upon our daughters, it actually unlocks the school gate and allows it into the school yard.

The problem doesn’t start and end with that schoolgirl, though, does it? Fuck no. The parents are up to their necks in this as well. At what point does the mum or dad of a teenage daughter allow her to go to school dressed in a Miss Sexy uniform? Unless they are at one with the idea of her never being taken seriously because she has tits, it makes my mind foam with concentrated bogglement. Yes, I know that teenagers can be stroppy ad determined and aren’t even meant to dress the way their parents want them to. Yet do you know what I’d do if this was Kraken Junior? I’d creep into her room at night, steal anything with the Miss Sexy label and set fire to it with my own flaming piss.

That’s why Miss Sexy neither belongs in our schools or on a school uniform website. Unless we’re happy to see teenage girls waggle their tits rather than a test tube or read Fifty Shades of Grey rather than Shakespeare Miss Sexy deserves the same parental rage as bullying. I wouldn’t tolerate a boy demanding a grope from my daughter in the yard and I as sure as shit don’t expect it from her school uniform either.

What do you think of this post?
Fucktastic (32) Interesting (0) Meh (0) Boring (3) Shite (10)
This entry was posted in Culture, Parenting, Sexism and tagged school, school uniforms, schoolgirls. Bookmark the permalink.

6 Responses to School’s Out