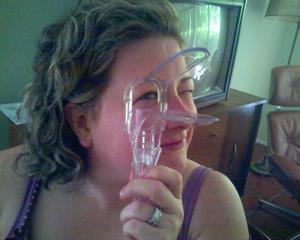 Speaking as a woman who has seen an entire human head erupt from her screeching vagina, I can honestly say that every single day of my existence I am chuffed to fuck that I am not in labour. That’s why, even though I give as much of a shit about the oncoming royal baby as I do about whether David Cameron has eaten enough caviar, my mind drifts daily to Kate Middleton’s minge. That’s right, her minge. No, not because I have any affinity to the royal family, but because any day now that woman’s foof will think it’s not so much shitting out an heir as it is an entire throne. So here is my letter of advice to Kate’s vagina because, soon, it’s going to need all the advice it can get.

Look, I know we’ve never met but seeing as I’m about to give you some pretty graphic insights into what is about to become of you, do you mind if I call you HRH (Heaving, Raging Hoof)? No? Lovely.

Now, HRH, you have to gird yourself. You see, until now you’ve not exactly been, well, strained. What I mean is you have lounged on the softest cushions, been wrapped in the silkiest gussets and have been cheered all the way down The Mall as if you’re the sole chuff upon which the perpetuation of mankind relies. And that’s great! Don’t get me wrong, if every time I went a-visiting I could drop my knickers only for my conjugal cavern to breathe in the smell of fresh paint in a newly built community centre/ velodrome/ hospital ward I’d be princessing it up too.

Thing is, it’s the hospital ward where all of this is going to change. I hate to break it to you, HRH, but you are about to experience an eruption of such globally seismic proportions that it’ll make the San Andreas fault look like a fucking paper cut. In fact when the royal baby’s bonce starts to chunder against you, those flaps of yours will put up as much of a defence as a sheet of cling film against a marauding steamroller.

Now, when the palaver starts you won’t really be needed much except in a, frankly, risible effort to stem the broken waters. You can flex those pelvic muscles all you like but that stuff’s going to gush out in a way that’d make an exploding Hoover Dam look like an incontinent vole. In fact you may as well save yourself the effort and go with it. It’s not often you get to look like you’re pissing on a corgi, is it?

Don’t get lured into a false sense of foofery though. You see, from the moment you arrive at the hospital you’re going to make five new friends. More precisely you’re going to meet the four fingers and one thumb of K-Mid’s midwife. Now, don’t be alarmed when she shines a torch into your eyes, prises you open and plunges forth like a heat-stroked pot-holer. Believe me, while you’re still nodding your hellos she’ll be wrist deep and rooting. Spare the niceties for when Prince Phillip pitches up and cackles at the way the baby looks like a turnip.

The news doesn’t get any better either, I’m afraid. In fact, it just gets worse. You see, the midwife might tell you that you’ll know when the baby is crowning (a rather suitable word in your position, don’t you think?) because you start to sting. Hmmmm. Sting? I’d have said that it feels more like someone wedged a burning torch made from barbed wire and the piss-drenched fangs of vipers between your flaps.

In fact, once you’ve become the equivalent of a set of lock-doors to the royal barge mere stinging would be a bonus. Tell me, have you ever felt yourself stretched to the point where you’d rather re-enact the final scene of The Wicker Man than go through it again? No? Well you will, although the only bonus is that, beyond a particular point of strain, the marital mudguards apparently go dead because their nerves shred. Hopefully this is what’ll happen to you, ideally before the midwife runs at you with a scalpel in her hand because K-Mid needs an episiotomy. I know! Stretched then stabbed! Can’t a royal minge get some respect?

Which means, HRH, that you’re going to have to toughen the fuck up. Your country may need you but K-Mid needs you more. Not only are you about to spit out the royal heir but after that you’ve got to spend sixty years stopping K-Mid from splattering seats with wee every time she sneezes/ giggles/ hollers at horses. Think you are up to it? You better had be. And me? Well I’ve done it once. I’ll b fucked if I’m ever doing it again.

What do you think of this post?
Fucktastic (19) Interesting (0) Meh (3) Boring (0) Shite (2)
This entry was posted in Culture, Parenting, Sleb and tagged childbirth, kate middleton. Bookmark the permalink.