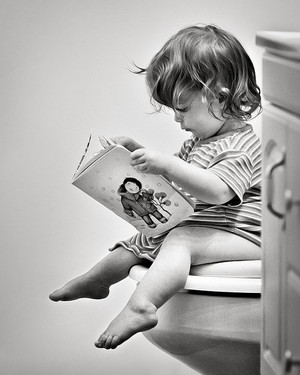 Hot knackersacks! You know how, when you have a child, you find yourself being flogged every conceivable gadget this side of a milky tit? Well thanks to the journalist Siobhan O’Neill, I’ve been furnished with a press release about what has to be one of the most superfluous items of toddler-tat I’ve ever seen. It’s a painted cardboard cabin that goes around your small child’s potty so that he or she can have “an intimate and playful space” to relax while taking a shit. I don’t have a pic for you but this much I know: if I can’t peacefully void my bladder in privacy, I’ll be buggered if Kraken Junior gets that luxury instead. So, in retaliation for the indignities I’ve suffered here are all the ways I will make her pay:

Nose pickings: Not only am I going to insist that she removes impossibly chunky boogers from my left nostril with her little finger, if I ever unearth my own I’ll wipe them across the carpet. Oh, and I’ll never again use a tissue when I sneeze. Instead I’ll turn to face her, throw back my head, and allow two cannons of mucus to explode from my snout, leaving Kraken Junior to wipe said proffering from my chin, chest and knees.

Toilet training: When I treat myself to a hearty dump I shall holler for Kraken Junior to daub at my arse with a fistful of toilet paper before insisting that she inspect the contents of the great white telephone. In fact I will engage her in detailed discourse about the size, consistency and colour of my arsely produce before insisting on being high-fived for being such a clever 42 year old.

Scoffing: The next time we sit down together for a meal, I shall fuck about so cack-handedly with my knife and fork that Kraken Junior will be forced to tear them from my hands to cut up my mash for me. I’ll then go on to spill peas into my cleavage, miss my mouth with my spoon, drag my sleeves through my gravy and knock over an entire glass of squash, ending said meal with me screaming tearfully as drink puddles around the cruet stand.

Sleep: As a woman who suffers from nightmares, never again will I allow Kraken Junior to doze while I run, in my head, from Nazis dressed as ducks. That’s why from here on in each of my wakeful moments will be spent pawing at my foof while prising open her eyelids. I’ll then babble at her semi-comatose form about how I dreamed that my teacher was a witch who ate buttons and lived in a radiator. Finally, I’ll wait until she is wide awake and in full fretting mode about how she’ll get through her school day on three hours kip before I leap back into bed and REM sleep after a mere fifteen seconds.

Bedtime: You know what I’m going to do? Go to bed at 7pm, that’s what. Only, I won’t really go to bed at all. Instead I’ll open and close my curtains as if I’m signalling a hitman, rip books off my shelves, root through a toy box, cram socks on my teddy bear and take a shit without flushing the toilet. Oh, but that’s only after I stand at the top of the stairs and holler anything from “I have something to tell you!” and “There’s a fly! A fly!” to “My bum itches!” and “Can we paint my ceiling in the morning?”

Teaparties: Fuck fingerpainting. Instead Kraken Junior will be forced to sit through hour after hour of tea parties, where I serve up pretend cake to the imagined figures of Amanda Palmer, Doug Stanhope, Richard Feynman and Fleegle from the Banana Splits. And yes, I’ll notice when she gives Amanda tea instead of coffee or when Fleegle receives fifteen teaspoons of sugar rather than the fourteen that he requested.

So, if toddlers really do want privacy while they learn to not piss down their own legs they’ll have to hand something to their parents in return. It doesn’t have to be dignity but it does have to be a taste of their own feverish medicine.

What do you think of this post?
Fucktastic (13) Interesting (1) Meh (1) Boring (1) Shite (3)
This entry was posted in Parenting and tagged potty. Bookmark the permalink.