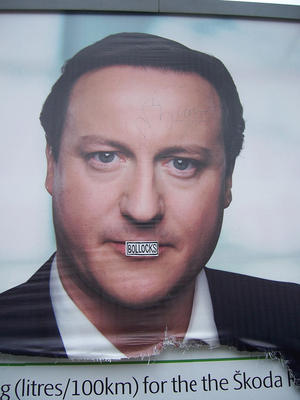 Look, you know by now that the heatwave has made me sweat so much that I have developed an acute case of trench-tit. Problem is that I’m also starting to wonder if it’s made me develop sweat on the brain. That’s because of an interview Jane Garvey conducted with David Cameron PM (with PM being the initials for Poor-Moitherer) on Radio 4’s Woman’s Hour. You see, in said interview he blathered his plans for regulating online porn yet said that he had no problem with pictures of topless women on page three of The Sun. Now this means one of two things: either Dave likes to spaff one out over Kelly from Slough in between Early Day Motions or he’s throwing the nation’s womenfolk under the bus.

It’s enough the make the No More Page 3 campaign shit nuggets of rage. You see, in the last few days Cameron has shot his political wad all over the nation, announcing that most UK households will have pornography blocked by their t’web provider unless they actively choose to, er, receive it. He’s also said that owning online rape porn will be illegal while calling for “horrific” search terms to be blacklisted. Yet when quizzed about his stance on naked women in newspapers he said, “We have to always ask the question where should we regulate and where shouldn’t we regulate, and I think on this one I think it is probably better to leave it to the consumer. In the end it’s an issue of personal choice whether people buy a newspaper or don’t buy a newspaper.”

More than that if, for Cameron, all of this hinges on consumer choice then why is he taking a monumental shit on the choice of parents and children to not see pornographic images of women when they so much as nip into Tesco for a lottery ticket. We’re hardly asking for the moon to stop orbiting the Earth are we? The last time I bought magazines with Kraken Junior (Doc McStuffins for her in the children’s section, Cloth for me in the hobbies section) I had to take such a complex and indirect route around the nip-offering tit-wagglers of the front pages, Nuts and Zoo that we’d have been quicker crawling to fucking Wapping.

Worse, page three images aren’t just for the delectation of the guy who buys them. Christ knows, if they were I wouldn’t want to douse Rupert Murdoch’s bollocks in turps before setting them alight. The images are actually for the delectation of everyone whether they want to see bare E-cups or not. Think of the blokes reading The Sun on trains and buses or in cafes who have no compunction about the children around them being exposed to such overtly sexual images that The Sun should start printing vouchers for therapy sessions. They may as well settle into a corner of Starbucks with a latte, muffin and a freshly minted issue of Razzle. At least that magazine doesn’t parade itself as news before assaulting unsuspecting five year olds with variously enhanced mammarians.

Yet Cameron is comfortable with that. And there I was fretting about the Tory party being a threat to the poor and the disabled when really it’s a threat to women, exactly half of the nation’s population. Fuck knows, the party is so outdated that perhaps it has forgotten that women have the vote at all and can tell the Tories where to shove their Sun-lovin’ ways come the next election.

Then again, I’d expect nothing less of Cameron. His refusal to protect his own daughters from The Sun’s telling men that, when his girls are grown, they are ripe for sexual assault is probably something he agreed to while employing  as his communications director Andy Coulson, editor of sister paper News of the World, and horse riding with Rebekah Brooks who was previously editor of The Sun itself. It looks like he’s made a deal with the devil.

What do you think of this post?
Fucktastic (17) Interesting (1) Meh (0) Boring (0) Shite (0)
This entry was posted in Culture, Parenting, Sexism and tagged david cameron, page three. Bookmark the permalink.