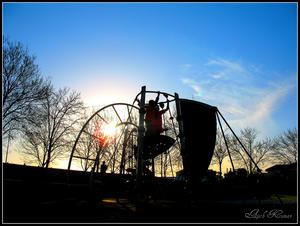 You know, as a kraken I don’t weep tears of joy often but I am awash with the drippy little fuckers thanks to the start of the new school term. As much as I delight in the ample madness of Kraken Junior I can’t wait to hand her over to her Year One teacher with the words, “Go on. You deal with the ever-prancing snot-bangle,” before lurching back to the bountiful silence of my writing shed. And that’s mainly because during the summer holidays not only have I visited dozens of playgrounds but I’ve had to deal with the parenting equivalents of the Harry Potter Dementors in every bloody one of them.

Tell me, kraken-lovers, why in the lurching fibroid of fuck are so many parents so incapable of controlling their kids in playgrounds? Yes, I know that these are havens of childish delight where tiny humans can indulge in their every whim to swing, spin, climb and break limbs but this summer I have witnessed such a staggering lack of playground etiquette on behalf of the inhabiting adults that the next time I venture into a park I’m doing it with a nail gun.

Let me explain. As much as Kraken Junior likes to run amok in a park – like a dog with burning paws – I still make a monumental effort to teach her to share and respect. No, don’t thank me. It’s my job. I tell her to wait her turn on the roundabout, not climb up the slidey bit of the slide and never to run directly in front of the swings. Fuck knows, even as a woman who has all the maternal instinct of a half-empty bottle of soy sauce I understand that my parental ‘on’ switch doesn’t get turned ‘off’ at the park gates. Yet this summer Kraken Junior has been shoved out of the queue for a climbing frame, galloped over by a marauding band of seven year olds and had to wait for the slide because some little shit was climbing up the chute and all while being watched by their mums and dads. Worse, at no fucking point did any parent ever upbraid their progeny for the fact that they were taking a massive social dump on the other children.

Seriously, I am at a loss. If Kraken Junior pushed a child out of the way so she could get to a swing first she’d be treated to seven shades of my particular brand of apeshit. And no, it’s not because I have a broom-sized stick up my arse but it’s because if Conjugal Kraken and I don’t teach her manners no other fucker will which means that by the age of fifteen she’ll be snorting meth off the arse of a feverish lollipop man. Problem is that if other parents don’t do the same then my goodly work gets undone not least because Kraken Junior then thinks it’s OK to curl a lengthy and foetid turd in the sand pit because every other wild-faced nipper is doing it.

Worse is that, in my experience, the guilty parents really do look like they should know one bollock of a lot better. See, I’ve lost count of the times I’ve seen well spoken, smartly dressed, fruit-touting parents ignore the idiocies of their kids. Believe it or not, in one park this summer a band of such parents, with cars bigger than my caravan, actually stood around a climbing frame discussing the importance of giving their kids soya milk and private tuition while said kids displayed all of the social capabilities of rabid mongels.

So why is it, then, that when the so-called Jeremy Kyle classes fail to control their kids in the same way they get pulled apart for raising an entire generation of lawless teenagers who display the sort of respect found under the wheels of a steam roller? Look, I don’t want to turn this into a class thing but, fuck it, I will: when the poor let their kids run amok they’re feral but when the wealthier classes let their kids run amok they’re just expressing themselves. There. I said it. Feel free to unfollow me.

And no, this doesn’t mean I’m the perfect mother. Christ, have you read my other blog posts? I am to mothering what Dr Harold Shipman was to the care of the elderly. But for all of my imperfections at least I give a shit not just about my own kid but about how she treats others. Which means that the next time I venture into a park it’ll be the parents who send me over the edge, not the five year olds who are packing the zip-wire like Ebola-infected monkeys. And watch out for that nail gun. I won’t be taking it to fix the swings.

What do you think of this post?
Fucktastic (40) Interesting (0) Meh (0) Boring (0) Shite (1)
This entry was posted in Culture, Parenting, Personal, Public and tagged children, parks. Bookmark the permalink.