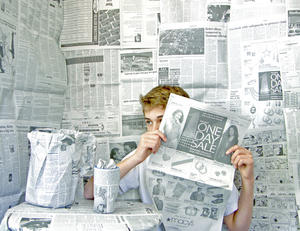 I have seriously lost count of the times I’ve nipped out for a paper, milk or bread with my five year old Kraken Junior only to be confronted by the waggling netherparts of Chantelle from Walthamstow all over some front page or other. And on every occasion I’ve had to take action to stop her – Kraken Junior, that is, not Chantelle – from getting an eyeful of the early message that she’s worth nothing unless her mammarians are being displayed like the crown jewels.

What in the stifling frig is going on? See, it’s illegal for parents to deliberately show their child pornographic images, the stuff of swooping Social Services and police records. Yet, somehow, it’s not illegal for newsagents to do it. So while you, as a parent, work off your sweating balls to stop your progeny seeing deeply inappropriate images for a child, just one trip to the newsagent for a packet of Hob Nobs will unravel all of that.

Look at it this way. Just this morning I’ve read about the National Association of Head Teachers warning that as soon as children have access to the internet their parents should talk to them about the messages surrounding pornography because it has such a staggering impact upon their self-image.

It’s as if the newspaper industry is actually racing to create an entire generation of highly-sexualised six year olds, like some great publishing experiment where one of them will win a bet. How in the frig girls are supposed to become scientists, artists, business leaders and academics is beyond me, when the newspapers relentlessly tell them that real success comes from being able to flash your 38Es to the world.

And this isn’t even about sticking these rags on the top shelf either. Ok, so the Sunday Sport isn’t physically accessible to small hands when it’s six feet off the ground but it is still visually accessible. I don’t know about your kids but Kraken Junior could spot a Jelly Tot from half a mile away so she as sure as shit doesn’t have a problem seeing an oversized pair of norks just above my head.