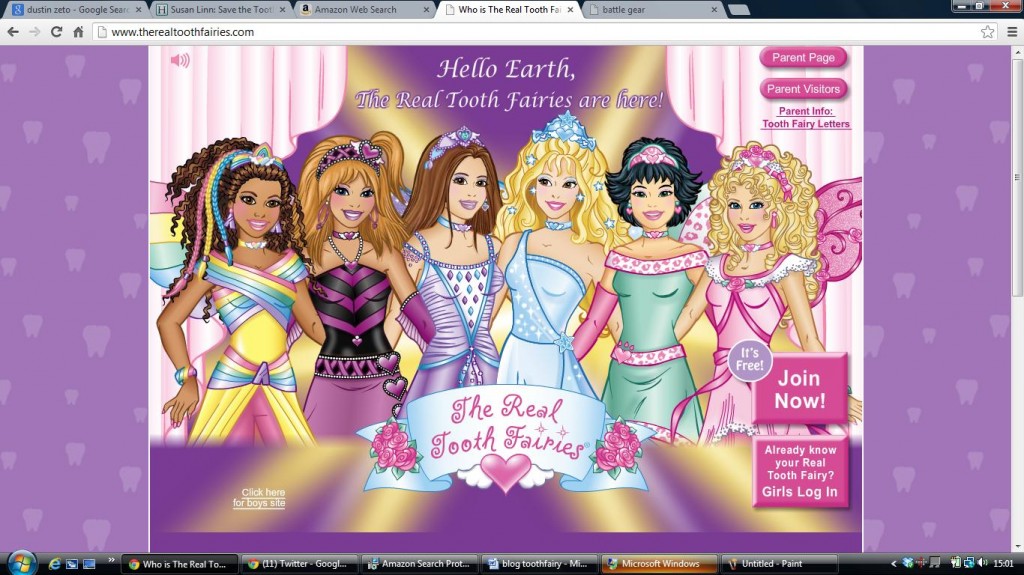 Spaff-weasel alert! Spaff-weasel alert! You know those times in life when you have to take up arms? Well this is one of those times. Kraken-lovers, I have discovered an enemy so voracious, so black-hearted, so much like Chitty Chitty Bang Bang’s child-catcher that when I tell you about it, it’ll be all you can do not to lock your offspring in a coal bunker and guard it with your fevered soul. That’s because the Huffington post has reported that a cash-fumbling, molar-thieving, kiddie-corrupting former Disney executive Paul Yanover, the CEO of Fandango (online movie-ticket floggers) wants to steal the tooth fairy.

No, I am not shitting you with this. You see, Huff-Po has shown footage from a pitch to investors by Yanover where he outlines how he’s going to bundle the tooth fairy into the boot of his car, drive until he runs out of petrol before dumping her in a storm drain and assuming her identity. The footage opens with a sugar-laden voice decrying how “a childhood character known by millions worldwide has not yet been licensed” and the self-same voice goes on to point out that, “With a target audience of 10 million U.S. girls ages 6 to 10 who lose 20 teeth, that translates to 200 million Tooth Fairy moments. And biology guarantees that will never stop.”  Yanover then goes on to spout gnomes’ bollocks about the product opportunities that are presented every time a child loses a tooth and how he can help make the tooth fairy as popular a brand as Spongebob Squarepants. Seriously, it’s the corporate equivalent of your 16 year old Facebook girlfriend actually being a 58 year old man who wanks at random school gates.

Worse (I know, I know) are The Real Tooth Fairies, six cartoon female fairies who look as if they are about to go to an 80s prom. Naturally, they are skinny, coiffeured, trowelled with make-up and grinning like meth-addicts. They make Barbie look like Hilary Clinton. Oh, and don’t fear if your kids are boys. Fuck no. They needn’t miss out. In fact they can latch onto the male version, muscle-bound, battle-ready Time Travel Elffs (their spelling) which promise an “action-packed lost tooth experience”.

What in the foaming mouthful of fuck? If I ever had the misfortune to meet Yanover and his cohorts it wouldn’t be kids’ baby teeth they’d have to worry about but their own. I’ve pictured re-enacting that that tooth-drilling scene from the Marathon Man fifteen times since I started writing this post alone.

Can’t kids just have one thing that isn’t packaged, marketed, advertised and sold? Look, half the fun of pretending that there’s a tooth fairy is that we parents get to use our own imaginations when we do it. We weave our own toothy tales, help our sons and daughters imagine what the tooth fairy looks like, we write heartfelt and personal messages to slip under pillows and get to creep about in the night like the man from Milk Tray. Yet the rectal bleeds behind the move to licence the tooth fairy want to make it as soul-less an experience as it is possible to be without actually sacrificing a goat in the company of a wild-eyed Vincent Price.

The fact is that the tooth fairy does not need to become yet another silky-haired pout-queen. Right now she is whatever children want her to be. She fills their imaginations way more effectively than this crowd of slpeen-chomping bastards ever could.

Oh, and if Yanover really is so excited about the money-making biological development of childrens’ tooth loss then perhaps he’d like to start licensing other biological milestones too. God alone knows what he could do for girls who start their periods and boys who discover wet dreams. And he’d have double the fun when it comes to the teenage development of pubic hair. Imagine the product placement he could conjure up for that lot? Fuck knows, he could corner the market in every developmental milestone up until and including the menopause.

So no, Yanover, just no. If you want to dedicate yourself to the art of wiping your arse on dollar notes you go for it but leave the tooth fairy out of it. She doesn’t need to be glitterfied, sexed-up, skinny or splattered over lunch-boxes and pencil cases. Thanks to the way each and every one of us imagines her to be she is utterly perfect just the way she is.

What do you think of this post?
Fucktastic (15) Interesting (0) Meh (0) Boring (0) Shite (1)
This entry was posted in Culture, Parenting and tagged tooth fchildrenairy. Bookmark the permalink.

4 Responses to Mouthing Off