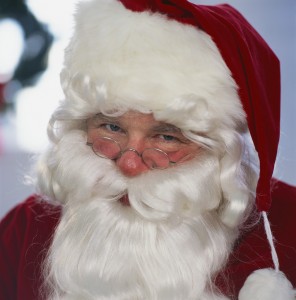 Just in case you hadn’t noticed, kraken-lovers, Christmas will soon be upon us like a shower of wee from a bus-station drunk. And I have to say that as a parent it is testing me to the utter fucking limit. Thankfully I am in receipt of only one shambling form of progeny – the ever snottable five year old Kraken Junior – but she may as well be an army of tiny, turd-cooing maniacs. Yup, such is her ability to turn me from the honest and open mother that I am for the other eleven months of the year into a lying, cheating, tricking, crafty, two-faced bitch from the moment the advent calendar goes up.

You see, Kraken Junior believes in Santa and as a result the entire family has been dragged into fashioning festive porkers to drag out said belief until she realises that the fat man’s wrapping paper is, in actual fact, our own. In fact I’m expecting a visit from the puce-eyed Richard Dawkins any day now, not least because for four weeks a year we actually pretend that fairy dust trumps peer-reviewed scientific achievements. Problem is that for the rest of the year I am so disgustingly honest with Kraken Junior that I am occasionally taken aside by a family member to be told that small children and graphic detail about, say, cadaver research, don’t mix. Now that I have to consistently lie to her my frontal lobes are starting to swelter.

Look, I’ve always been honest with Kraken Junior. If she asks me about trees I bang on about photosynthesis and if she points and laughs at my hairy chuff I tell her about puberty. She now knows so much about periods that they bore her, has already decided that she doesn’t want kids because it’ll “hurt my foof” and has digested enough information about death that, last week, she told me her plans for painting our house pink and having the ‘big bed’ to herself “when you and dad are dead”. No, don’t thank me. I see it as my parental duty to get her to womanhood without her fainting in shock at the age of twelve when she sees blood on her gusset or going blind at the shock of her first penis.

All of which makes the run up to Christmas a tinsel-strewn moral maze. Suddenly I’m telling Kraken Junior that Santa’s watched her like a pervert all year, that he has a magic key to the house because we have no chimney, that his reindeers only eat giant carrots, that the post-box is essentially a tall, red portal to the North Pole, that if she doesn’t tidy up her bedroom Santa won’t leave any presents and that she needs to clean her teeth so that the moonlight will bounce off them, marking Santa’s way. Where in the fuck I got that last one from, I don’t know.  Don’t repeat it whatever you do, not least because it leads to a conversation about how nanna gets gifts even though her teeth are in a glass at the side of the bed.

And you know what? This little lot is going to bite me on my monumental arse when Kraken Junior finally realises that Santa is about as real as a Tory promise to fight poverty. And that day is coming whether I like it or not. God alone knows how I’m going to explain that while I have been happy to explain to her the peculiarities of the shrew’s digestive tract after the cat’s dragged in a torn apart, still spouting specimen, I have done everything within my power to lie about her new sled coming from Santa rather than Asda. And even though I am already trying to prepare my answers to her no doubt furied questions (like mother, like daughter) I am at a complete fucking loss. Answers on a postcard via the North Pole, please.

What do you think of this post?
Fucktastic (3) Interesting (2) Meh (0) Boring (0) Shite (2)
This entry was posted in Culture, Parenting and tagged lies, santa. Bookmark the permalink.