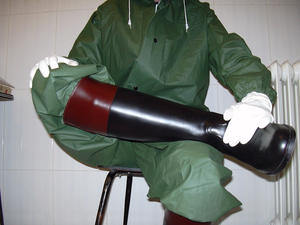 I can’t help thinking that I might have suffered a serious brain injury during the night because today, for the second time in recent months, I am decreeing that Simon Cowell is the voice of reason. That’s because during an interview with overpaid tooth-monkey Ryan Seacrest in the US, when asked if he’d be at the birth of his much anticipated progeny he said, “Are you out of your mind? There are certain things you shouldn’t see. You don’t want to go into the restaurant when they are making your dinner. I shall be very close but I don’t want to deal with that.” And you know what? If I’d had a choice during childbirth I wouldn’t have wanted to deal with that either. So here are the parts of the spawning process that I too would have gladly missed if I’d have had a Cowell cock instead of a Kraken crack:

Pissing my amniotic water over every available surface: Think of Las Vegas’ Bellagio Fountain having live grenades shoved up its spouts and you’ll come vaguely close to the breaking of my waters at 4.10am in January 10 2008. Not only did my bed, pillow, duvet, bedroom carpet, bathroom tiles, car seat, delivery suite and a succession of kickers and trousers get a soaking but I actually developed trench foof. Oh and yeah, breaking waters do hurt. I can still hear the elastic twang of the sac snapping after five tormented years.

The delivery table: The fuckers told me it was a bed. Really it was a Transformer because somewhere between pushing and tearing it sprouted arms and legs, stirruped my knees and proceeded to shove them into my face. By the time Kraken Junior emerged I’d changed my name to Olga Korbut and demanded a place on an Olympic gymnastic team.

The student: Seriously, if you ever want to know the reality of what is happening between your knees during the gruelling assault of childbirth, invite a nursing student into the room. Mine, a teenager who still had the ink from his GCSEs on his thumbs, stood directly adjacent to my searing clunge and proceeded to renact every moment of the birth through his ever widening eyes. I didn’t need the midwife to hand me a mirror because he did all the work for me. In fact, such was the horror on his face that I’m not sure I gave birth so much as I renacted the Somme with my labia alone.

Abusing the midwife: My abiding memory of my midwife is of her standing between my gaping knees as she ate a bowl of breakfast porridge. Conjugal Kraken’s abiding memory is of when she told me to push and I told her to go fuck herself. I also recall not being timid in my mid-contraction response when she offered me a mirror so that I could watch Kraken Junior emerge from my straining love tunnel. Seriously, if I wanted to see camel wriggle itself through the eye of a needle I’d go live with the fucking Tuaregs.

The fear of death: Yes, I may have been worryingly silent in the last moments of Kraken Junior’s birth but that was only because I was hurredly preparing myself for the hereafter. Indeed, so convinced was I that the route of her head through my pelvis would kill me that I even recall wondering whether I’d reminded Conjugal Kraken of the music I wanted to be played at my funeral. In fact, when she finally splattered onto the delivery table the first words she heard were “Oh, thank fuck!”, such was my bogglement that it wasn’t my soul that had been delivered to Satan instead.

The pain: You know how midwives tell you that childbirth will hurt? Well they don’t mean it, only because there is no word in the English language that can sum up the reality of one human screeching out of another like a mentally deranged Russian doll. ‘Agony’, ‘torment’, ‘suffering’ and ‘anguish’ are words so inept in describing the phases of labour that it’d be more accurate to use the words ‘teapot’, ‘bludgeon’, ‘sparrowhawk’ and ‘fistule’.

The post birth shower: Forget enjoying the comforting splash of warm water over your body as you glow in a job well done. Instead I was propped onto a shelf in a shower, in a gas n air induced come-down, legs akimbo and tits swinging, while a terrifying South African nurse ripped the shower head off the wall and aimed it at my raggedy  muff, much in the way hoses are aimed at lice-ridden asylum inmates. If my dignity hadn’t been torn from me by the midwife stuffing her entire hand into my foaming vagina, the shower did. That’s why Simon Cowell is right to hide in the waiting room and why, if I ever have the misfortune of giving birth again, I’ll be right next to him.

What do you think of this post?
Fucktastic (11) Interesting (1) Meh (2) Boring (1) Shite (3)
This entry was posted in Parenting, Personal and tagged childbirth, simon cowell. Bookmark the permalink.