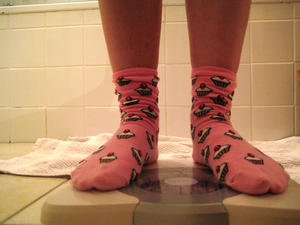 NB: When I wrote the below post OK magazine hadn’t apologised for being fat-hating wank-tassels. They still haven’t. They have, though, backtracked like steamrollers stuck in reverse. I shall still treat you to my outpourings, however. No, there’s no need to thank me…

Look, before I start I don’t want you to take offence but I have to ask you something: have you been snorting Amanda Bynes’ crushed turds from cistern lids? I only ask because this week you have acted like a teenage boy who’s shocked to wake up in a pool of his own prepubescent spaffage. Indeed, such is your inability to wrap your collective royal-drenched mind around basic biology that within hours of Kate Middleton shoving through her foof a Winnebago called George you printed that magazine cover.

I’m not going to ask you if you’re shitting me. I’m going to beg that you’re shitting me because the reality is too bleak to register on my moral and social scale. You see, for your latest issue you run around on the cover with your arms waving while screaming, “Kate’s post-baby weight loss regime”, “Her stomach will shrink straight back” and “Your exclusive duchess diet & shape-up plan”. So even before the royal baby had been graced with a name you were telling its exhausted, foof-sore mother that she had to lose the weight. Well I bet K-Mid is chuffed to shit with that support of yours. No, no, don’t you go worrying about whether George has all of his fingers or toes or whether K-Mid has been left with an undercarriage that leaks every time she has to curtsey. You just get on with the important issues of the day, like the fact that she didn’t have her vital organs sucked out during labour just to flatten her belly again.

In all fairness, though, you are not alone. One the day that K-Mid appeared with the newborn I heard one female journalist ask why she still had a bump, as if pregnant women are nothing but zeppelins just waiting to be deflated  by a baby’s skull. Really, I appreciate that it’s been a while since you sat in a biology class so you may be rusty about the finer points of childbirth but that’s still no excuse for being so staggeringly ignorant that you’d make boils on the arses of tramps look like intellectual life forms.

Which makes this a good time for you to swap your morning cocktails for a fistful of reality. You see, I gave birth five years ago and still haven’t lost the baby weight. In fact in the wrong light I look as if I’ve endured a sixty-month gestation period. More than that, my clunge is now the shape of a Curly Wurly, thanks to the way it was repaired after tearing, and if I sneeze on a full-bladder I can wash my own feet. Oh, and while I don’t have stretch-marks (you must be so relieved) I do have an arse the size of Mars. Believe me, even at the forty-week mark K-Mid looked in better nick than I do now.

Worse, for gifting the nation with a healthy heir to the throne, you’ll now reward K-Mid by training your cameras on her belly in the same way that snipers train their pistols at members of the Taliban. She will cease to be a female human with feelings, hopes and caviar-induced farts and simply become a giant, walking bellybutton that gets bullied from now until it hits the menopause. I have no doubt, OK magazine, that you’ve kept that bitterness fondue bubbling in your kitchen, ready for your assumptions to be skewered and dipped into it. After all, they must have cooled a little since Beyonce knocked out Blue.

Anyway, I know that you’ve probably had this cover ready for weeks, if not months. The only go-ahead you needed to send it to press was for the ever-simpering Nicholas Witchell to start hopping about outside Buckingham Palace like an electrocuted carrot. Thing is, I have no idea what you hoped to achieve with it. I mean, did you actively decide to take aside the woman you seem to revere more than any other just to tell her that if she hasn’t started losing weight even before the placenta has left her uterine nook she is dead to you? And there she was hoping for a bouquet of flowers and a card shouting, “It’s a boy!”.

Which oddly means I have to thank you, OK magazine, for your vile cover. You see it’s reminded me that should I ever run out of cat litter I can buy a copy of your mag, put it through my shredder and let my moggy shit all over it. She’d certainly find more use in it than any sentient human being ever could. Perhaps K-Mid could do the same for the palace corgis too. Then again perhaps not. Those dogs have far too much class.

What do you think of this post?
Fucktastic (28) Interesting (0) Meh (0) Boring (0) Shite (0)
This entry was posted in Culture, Parenting, Sexism and tagged kate middleton, ok magazine, weight. Bookmark the permalink.