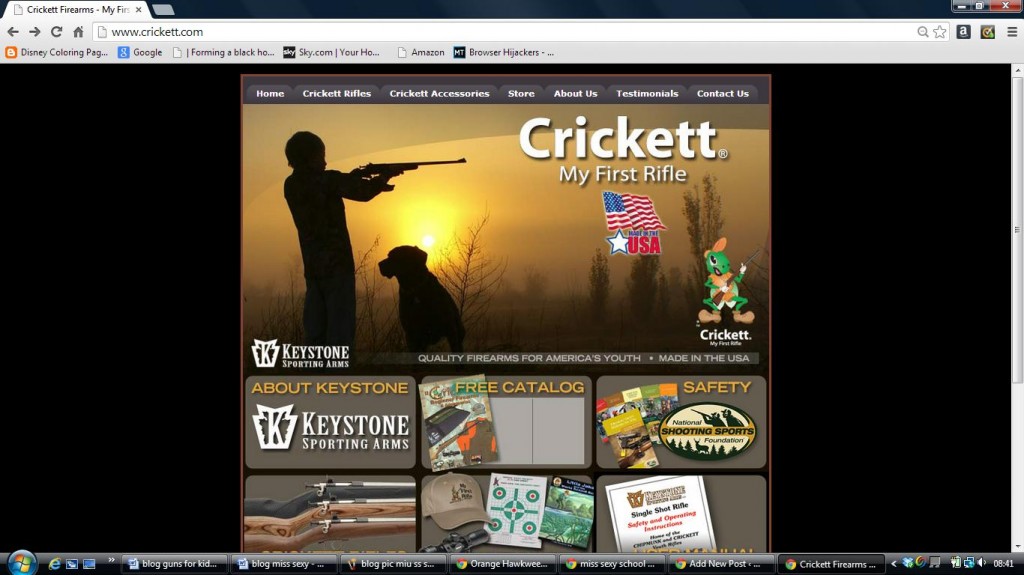 Right. Ok. Hold the fuck on. I’ve just ventured onto a website of such staggerment that you’ll have to give me a minute, not least because my head is now between my knees and I’m puffing into a paper bag. See, you might have heard one of many recent stories about US kids getting their sticky paws on guns before accidentally blowing out the brains of various family members. So get a load of this website for Keystone Sporting Arms which doesn’t just make and sell Crickett: My First Rifle but has tagline Quality Firearms for America’s Youth.

No, I’m not making that up, even though I’m actually hoping that a sudden yet imperceptible brain injury is making me see things. You see, the makers of this gun claim that their goal is to, “instill gun safety in the minds of youth shooters and encourage them to gain the knowledge and respect that hunting and shooting activities require and deserve”. A fair point if you’ll starve to death without shooting and eating the odd seasonal moose. Yet the testimonials quote parents who have given guns to a nine year old, seven year old, five year old and – deep breath – a four year old. Oh, and I mustn’t forget the parent who bought his six year old daughter a rifle rather than take her for doughnuts.

You know what, kraken-lovers? If I just wrote the phrase ‘fuck-wonder’ 800 times it wouldn’t do this subject justice.  That’s because even considering what makes any sentient being hand a gun to a four year old blows holes in my frontal lobes. I have no idea what would happen to my central nervous system if I actually saw it happen. Go on, picture your child at the age of four, all snot, skid marks and incessant jabber. And then picture said child while attempting to steady a rifle butt and fingering the trigger as if it’s his or her left nostril. It’s the equivalent of putting a monkey’s hand on the mythical big red nuclear button before tazering its cock.

When Kraken Junior was four she still couldn’t put on her own socks. She couldn’t cut up a sausage without knocking peas off her plate. So no, she as sure as shit wasn’t capable of safely handling a killing machine and I’ll bet my right tit that no other four year old is capable of handing a one either. Genuinely, I couldn’t give a flying fuck in a fuck factory about how rifle-buying parents may claim that the key to safe gun-handling is to start them young, because that’s like saying that the key to kids understanding relationships is by letting them have on their eighth birthdays.

Surely the key to safely using a rifle is to understand what that rifle represents: the ability to kill another living creature, human or animal, the finality of such an act, the ease with which a gun can go off, how it should never be used in anger… yet a four year old doesn’t understand these concepts. At that age, Kraken Junior thought death involved fairy kisses and glitter and forever sailing on a sea made of Haribo. She’d have thought that blowing my brains out would have been like sending me on the best holiday in the world.

Look, who in the caverns of Satan’s crucible of spaff wants to grow up in a world where all teenagers know how to shoot? It’s bad enough that they wear their trousers around their knees, drink red Bull for breakfast and think that Robin Thicke is mentor material. Add to that several rounds of bullets and a lengthy firearm and our national age average would never get past 39.

Anyway, my dad, Ole’ Pa Kraken, had a gun when I was a kid. It was a 12 bore shotgun and he had permission from a local farmer to kill rabbits on his land. Suffice to say all OPK ever killed was an accidental sheep and the lower portion of his back from laying in the grass for hours on end. More than that, said gun was locked in a cabinet that could only be opened with two sets of hidden keys rather than being handed to me so that I could tinker with it in the garden. The farmer wasn’t so lucky though. At the age of twelve his son shot himself in the face and died while playing with his dad’s gun. No one needs to tell him that guns and four year olds don’t mix.

All of which is why nothing will ever convince me to hand a gun to a child, let alone when that child still squeals with excitement at its own turds and thinks Mr Tumble should be Prime Minister. If America really wants to be safe it needs to stop giving its guns to babies. That’s the only call to arms I want to hear, at any rate.

What do you think of this post?
Fucktastic (9) Interesting (1) Meh (0) Boring (1) Shite (3)
This entry was posted in Culture, Parenting, Public and tagged children, rifles, runs. Bookmark the permalink.