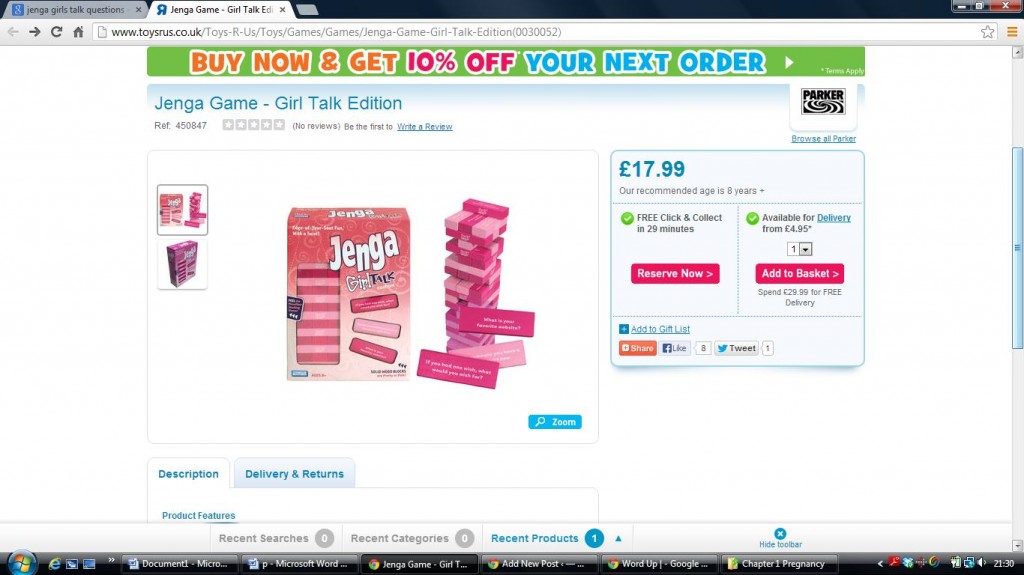 What in the squalling ladycracks of prepubescent voles is this? You see, while the rest of the world is desperate for a peek at K-Mid’s underparts all while pissing it’s own pants at the news of the royal heir I’ve been busy patrolling the globe’s sexist obscenities. That’s why today I am bringing you not a future king but Jenga – Girl Talk Edition and, by fuck, it’s a delivery that’s made me shit marbles.

That’s because Jenga – Girl Talk Edition is apparently the gaming equivalent of a group of women throwing their ovaries into a bowl and picking them back out with their eyes shut. Based on the traditional game of poking at blocks until the tower falls, the Girl Talk Edition fulfils the first feminine stereotype by having blocks in two shades of pink (rose and cervix). Yet that’s not all. Each block has a question written on it because, presumably, women can’t actually play games without wanting to spaff on an on and on about themselves at the same time. Thus the players get to blather answers to “What is your favourite magazine?”, “If you had one wish what would you wish for?”, “What is your favourite website?”, “Who is your best friend?” and “Name someone you have a crush on right now”. It’s as if the Spanish inquisitors stormed in determined to root out the bland.

Worse there’s no Jenga – Boy Talk Edition. Fuck knows why. Perhaps it’s simply because the manufacturers of this box-fresh bonfire of shite don’t think boys actually talk at all, communicating instead through a series of clicks and squeaks like net-caught dolphins. Or perhaps it’s because, somehow, girls need a special edition of Jenga because their eyes are incapable of recognising wood unless, of course, it’s in the shape of a penis. Then again it could be because some wank-fisted, maggot-mouthed, chump-fucker thinks that the personalities of boys and girls differ so violently that they need varying versions of the same bloody game.

More than that, at what point was it decreed that boys couldn’t have favourite websites, magazines and wishes too? Now, I have never asked a boy about his favourite website before but I remain confident that he’d be able to give me as intelligent an answer as anyone with tits. Or perhaps, because of some apparent dysfunction of his genetics, he’d mistake my enquiry for a particularly pungent fart. Which makes me wonder about the questions that would be printed on the blocks of Jenga – Boy Talk Edition should it ever go into production. Then again, seeing as it’s assumed that boys don’t talk in the first place the bricks would probably contain the sort of scrawls and cock-doodles that you’d find on toilet walls.

Do the people who produce these games actually think that boys and girls are that different? You’d swear they had to produce a version for dogs and a version for peg bags because the two are so deeply incompatible. What sort of message is that to vomit all over the nation’s yoof? That not only do they have fuck all in common with people with opposing genitals but that they function on such a different wavelength that they can’t even find common ground in a pile of cheap, wooden bricks. Seriously, when we get to the stage where girls and boys can’t even knock-up a tower together without needing thirty years of therapy it’s time to set fire to toy warehouses. Pass me the matches.

So there are two reasons why Jenga- Girl Talk Edition won’t be gracing my kraken cave. Not only is it so swelteringly sexist that it makes Roy ‘Chubby’ Brown look like a suffragette but it’s so perpetually unintelligent that it makes women look like inbred goats. Build that tower if you want but I’m going to knock it right back down again.

What do you think of this post?
Fucktastic (16) Interesting (1) Meh (0) Boring (0) Shite (0)
This entry was posted in Culture, Parenting, Sexism and tagged girls, jenga, sexism. Bookmark the permalink.