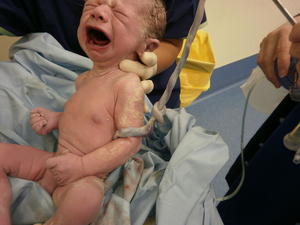 Now, where was I? Oh yeah. I was going to give you the fabulously gory details about last week’s surgery wasn’t I? Thing is, I’ve seen something so berserk that I intend to write about that instead. So for those of you hanging on for the post-op details, hang on a bit longer, for today I intend to kick the festering shit out of the online reaction I’ve seen to a photo, on the Facebook page of The Reluctant Mom’s Blog of a woman holding a newborn baby.

So in the pic the woman, who was naked, was holding her newborn and it was still attached to her by the umbilical cord. Said cord snaked from her foof to the baby and, considering her vagina had just exploded to the sound of an infant’s head, she was remarkably untouched by gore. Yeah, there was some small splatter if you looked for it but that was seriously outweighed by the fact that she looked about as chuffed to shit as it is to get without having a gob-load of cake.

I’d have posted this pic for you here but Facebook has removed it because it clearly offended so many people. Well, that’s if the comments attached to the pic have anything to do with it. Without exception every comment I saw was derogatory. The words “Ew!” and “Yuck!” were accompanied by complaints about the size of the mother’s belly, why it wasn’t flat yet and why her muff had hair on it all with general disgust at the sight of an umbilical cord. There was even a grumble about the lack of photoshopping, for fuck sake. It was like watching monkeys throwing sticks at the sun.

Now, I know screw-all about the people who wrote these comments. Perhaps they have genuinely been raised in cat-food factories where childbirth is replaced by fairy spells and women look like streaks of Danish bacon. In fact it’s not beyond the realms of possibility that they all live in an Institute for the Perpetually Mind-Fucked.

What in the giddy realms of shit did these guys actually think that childbirth looked like? Seriously, if they become panic-stricken at the sight of a naked, smiling woman holding a newborn fuck knows how they’d react if they were treated to the sight of an emergency caesarean.

Even before I was forced to witness an entire human being splitting my love tunnel I knew it was  a messy business. Up until the time I gave birth I had rarely seen pictures of said event but I as sure as shit knew that a grinning, upright woman was the wafer thin end of the perineum-splitting delivery wedge.

Look at it this way, the pics that could have ended up on t’web after forcing Kraken Junior’s skull through my nethernook would have been one frig of a lot worse. They would have included shots of me straddling two turds released by an uncontrollable bowel, the midwife having the skin screamed from her cheeks, me hollering demands to die while punching my own head, bug eyes that look as if they’d been over-filled with piss, the broken fingers of Conjugal Kraken and puce, leaking breasts splattered with vomit. Believe me, merrily posing with a baby and a hairy foof would have been a glamour shot.

Perhaps the people who have recoiled wildly from this pic are the very same people who spent entire terms of biology lessons studying their own nose produce at the back of the class. In fact, I’d pay cold hard cash just to ask them how they ever thought babies emerged from their hosts. I suspect at least one answer would include infants being sneezed out during high pollen counts and caught with koala paws.

All I can hope is that the ignorant tag-nuts do a spot of research before they bandy about their raging genitals to find themselves on the business end of a knuckle-cracking midwife. Oh, and I secretly hope that their delivery experiences are traumatisingly gory too. If this pic makes them “Ew!” then fuck knows what they’ll do when the doctor dusts off the forceps.

What do you think of this post?
Fucktastic (22) Interesting (1) Meh (0) Boring (0) Shite (0)
This entry was posted in Culture, Parenting, Public and tagged umbilical cord. Bookmark the permalink.