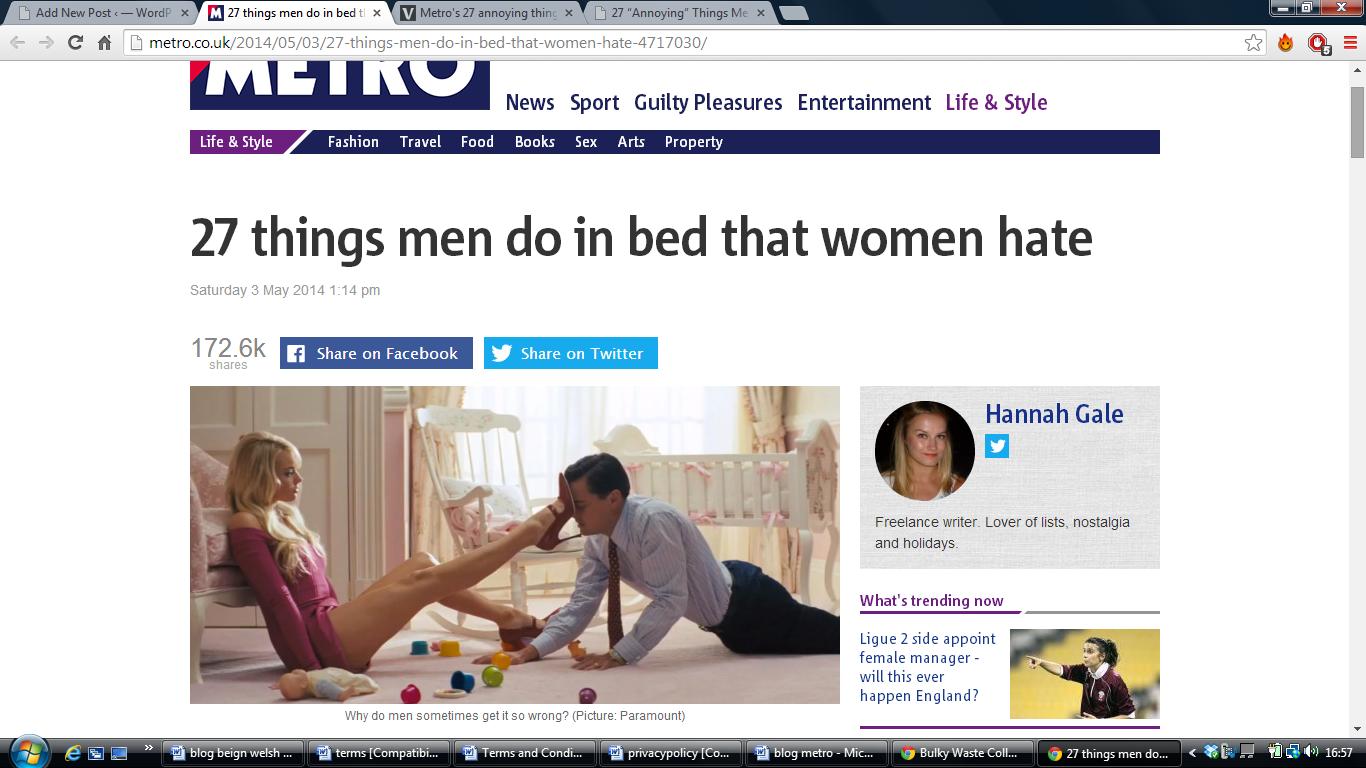 Hold the boat, kraken lovers. Hold the bloody boat. I have just read something so heinous and bleak-hearted in that faux-newspaper for mouthbreathers, The Metro, that I may have to leave you a moment to soak my frontal lobes in a cleansing mixture of hydrochloric acid, washing-up liquid and bees. Let me explain. On Saturday 3 May The Metro printed an article entitled 27 Things Men Do In Bed That Women Hate. Written by one Hannah Gale, the piece listed various alleged irritants such as, “When they ask you to put the condom on”, “Man stubble “, and “Trying to remove underwear with their teeth”. That’s not the problem, though. Fuck no. The problem is with the fact that eight of the points list sexual assault and rape before passing them off as annoyances, much like overpriced coffee and bad drivers. And for your rage and delectation, here they are:

‘When you give them a blow job and they act as if you don’t have a gag reflex. How about I’m sick all over your penis?’ Yup, you read that right, kraken-lovers. According to The Metro a man forcing his penis into my throat, even though it is making me uncomfortable, scared and upset, now deserves to be shrugged off more than it deserves to be a moment of monumental distress. Somehow the notion that this will make me vomit as a result is far more important than the fact that it’ll also make me want to call a rape crisis line.

END_OF_DOCUMENT_TOKEN_TO_BE_REPLACED 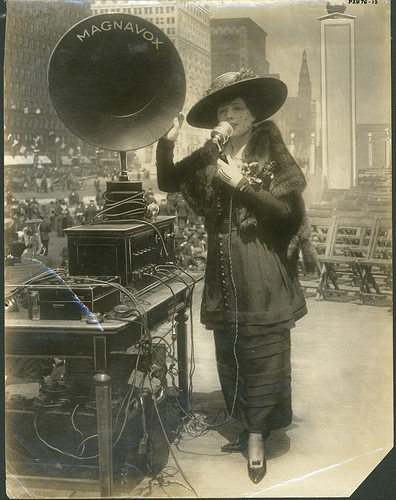 You know, it rarely occurs to me to clarify what I have written on this here blog, not least because it’s delivered via the medium of loudhailer by a kraken who has had the discretion part of her brain damaged by inhaling vast quantities of Jaffa Cakes. From where I hit my keyboard, what I say and mean is as plain as Nigel Farage’s inability to attract anyone who isn’t male, white and middle aged. However, in the last couple of weeks I’ve been in receipt of the odd message accusing me of something so heinous that I’m not entirely sure that even I can bring myself to repeat it. No, I can’t. Really, no. What’s that, you say? Jaffa Cake? Oh go on then. It’s the accusation that I only say what I do to boost my blog stats.

I shit you not, after two years of authoring The Kraken Wakes (which amounts to 527 posts, roughly 400,000 words and 321 uses of the phrase cock-knobber) there are actually people out there who think I have put in all of this hard work simply to rack up 500 hits a day and 1836 twitter followers. That’s right, in a desperate effort to make myself known to the world – because my fifteen years as a journalist just didn’t cut it – I am now apparently doing nothing but courting controversy like a cultural pervert sticking his todger through a hole in a school fence. The faux-brains behind these missives genuinely think that I have somehow pulled these posts out of my arse just to get noticed. For the love of fuck, if I wanted to get noticed there’d have to be better ways of doing it than bashing out 800 words on anti-rape pants with one hand while bathing Kraken Junior and cooking dinner with my right foot.

END_OF_DOCUMENT_TOKEN_TO_BE_REPLACED

What do you think of this post?
Fucktastic (21) Interesting (4) Meh (0) Boring (0) Shite (2)
Posted in Personal | Tagged blogging, controversy | Leave a comment 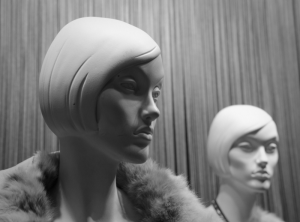 Kraken lovers, it looks as if I’ve been living my life in some sort of rum induced fug. I’ve just turned 43 years of age (although I don’t look a day over 61)but I have only just realised that for every one of those 43 years I’ve been assailed by a question so bleak that it makes me piss a steaming mixture of urea, punches and regret. And if you’re a woman it’s a question that’s been assailing you too. Problem is that said insidiousness is such an integral part of life that it’s easy for us to think it normal. It’s not. Not by a long fucking shot. So in the words of a certain antipodean alleged pervert who is about to stand trial, do you know what it is yet? Well you do now. It’s the what-body-shape-are-you? quiz.

You know exactly what I’m talking about, not least because it features in women’s magazines almost as much as page numbers and self-hate and has done since the creation of the printing press.  Yup, it’s the quiz where readers are made to stare at a series of drawings representing the female form, each of them labelled like pork chops in a butcher’s window. Said quiz will usually demand that women decide whether they have the body shape of a triangle/ column/ rectangle/ apple/ hourglass/ pear before being given instructions on how to accentuate or hide said form according to whether you’re happy to be pigeonholed with other generously-hipped women or consider yourself so unfit for human consumption that you start dressing in family tents from Millets. These quizzes therefore include as much room for individuality as the barber shops currently operating in Kim Jong Un’s North Korea.

END_OF_DOCUMENT_TOKEN_TO_BE_REPLACED 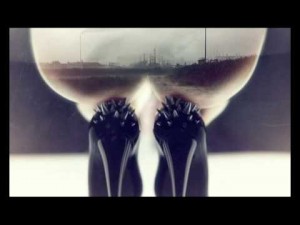 Look, if you read Monday’s post you’ll know that when I switch on the television the result is much like plugging my frontal lobes into and electricity socket labelled, “For the love of fuck!”. That’s because I routinely see the sort of programming that psychologists use to traumatise chimps and that’s why I was chuffed to stumble upon True Detective, a show so intelligent, unvarnished, bleak, challenging and dark that it made this blog look like a Women’s Institute haiku competition. Until, that is, I got three episodes in and started to recognise a pattern, a pattern consisting solely of an endless stream of dead and naked women.

If you haven’t seen True Detective, here’s the deal. Mathew McConaughey  and Woody Harrelson are detectives working on a case in 1995, the case being the ritual murder of a young woman. The story is essentially told through flashbacks and McConaughey and Harrelson do a spectacular job of it. I shit you not, just watching McConaughey light a fag was enough to glue me to the sofa. That’s not the problem, though. The problem is that for the duration of season one all the female characters are killed or bare-arsed or both. Whether they be wives, mistresses, girlfriends or murder victims, they are barely ever dressed providing viewers with such a parade of nips that I felt the urge to hang up my coat. Even the opening credits have image after image of nude women in various stages of death or orgasm. So while I was addicted to the acting I was repelled by the fact that every women I saw was either screwed or slaughtered.

END_OF_DOCUMENT_TOKEN_TO_BE_REPLACED 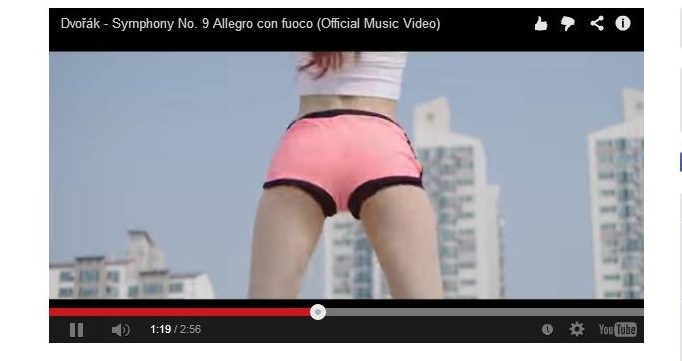 One of my few places of solitude is my sewing shed, where I sit amongst a mountain of fabric and bobbins while rustling up dresses and shoving Jaffa Cakes into my mouth, ideally three at a time. I’m living the dream, kraken-lovers, living the dream. Except that it today became a nightmare because upon returning from my buttony nook, I was accosted by the usually delightful  My Tights Won’t Stay Up with a film I can only describe as a peek into the festering mind of an irradiated donkey that has a fetish for feeding rohipnol to moles and then pissing over them. That’s because it’s a film pimping classical music and it’s using twerking women dressed as schoolgirls to do it.

Feel free to grab a bar of soap and scrub yourself while that last line is sinking in. God knows, I’ve actually watched the film and as a result I want to set fire to my frontal lobes. You can see it too, right here, if you like. If you don’t like I can tell you that the three minute film has been made by Raf Reyntjens, a filmmaker who has created this vignette of cock-wash for B-Classic, a Belgian classical music festival, in an attempt to draw in a new audience. The film is essentially an ad with the soundtrack provided by Dvorak and his 9th Symphony and the visuals are provided by tits and arses. Yup, for an entire three minutes you too can watch grown women twerking, grinding, lip-licking, tit-thrusting and generally spasming to Dvorak while dressed in teeny schoolgirl outfits, flap-gripping hotpants and swishy pigtails. The garnish on the top of this shit pie is the line, “You just listened to three minutes of classical music”, just in case viewers were so busy wanking into a sock that they’d subconsciously tuned out the sound.