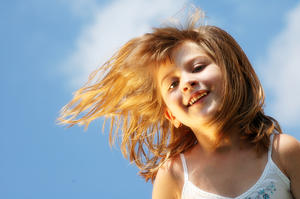 Holy shit on a burning trumpet. I barely know how to start this blog post because I am so stunned by the subject matter that I’ve spent the last hour rasping into a paper bag. See, the rather spectacular journalist Lucy Jolin has sent me a press release that she’s had the misfortune to receive. It’s one of the bleakest things I’ve read since the last time Jan Moir bashed her head against her typewriter. That’s because it is entitled: Harper’s Got the Best Celeb Kid Hair.

No, that’s not seven words that have just been plucked from a speeding tombola. That’s actually the title of the press release. Said bowl of festering arse-weed is a poll conducted by Fabriah.com, a “professional hair products retailer” (or flogger of extortionate shampoo) which has decreed that tiny Harper Beckham has been voted as the celebrity progeny with the best hairstyle.

The survey apparently asked mothers (not fathers) to choose the most stylish hair from a list of ten celeb whippersnappers. The results meant placing the likes of Kingston Rossdale, Zahara Jolie Pitt, Romeo Beckham, Suri Cruise, Apple Martin and various other ridiculously named children in top ten positions, like greyhounds at a racetrack. I shan’t bore or offend you with their scores.

Why in the fuck would anyone want to do a survey like this one? Even if it’s to promote bloody conditioner I can’t see the relevance. It’s the equivalent of Pretty Polly scoring toddlers on the length of their legs or Eyelure rating them on the thickness of their lashes. At no point does any of this actually endear a sentient being to the product being sold.

If someone came up to me and rated my five year old daughter on her pigtails I’d kick a hole in their thorax. As if adults aren’t under enough pressure to conform to the stereotypes that are loaded upon them, polls like this simply start the vile process a decade earlier. No wonder six year olds are pinching the fat on their thighs and sucking on lettuce. It’s because surveys like this tell them that the only thing that’s important in life is to resemble celebrity spawnage.

Apart from which, I don’t know anyone who actually gives a fuck about the style of a child’s hair. Have the cold-sores parading as brains at Fabriah.com ever been within a shit’s distance of a small child’s bonce? If they had they’d know that there are a thousand considerations that come before whether the kid looks good in pigtails.

Kraken Junior’s hair is a case in point. At any given time her tresses can contain snot (wet or dry), sick (wet or dry), glue (er, wet or dry), cereal, chocolate, knots, a stuck comb, paint and a raging case of nits. Fuck knows, sometimes she has them all at once. Caring for her hair is like trying to tame a Tasmanian devil, which means I really don’t give a shit about whether her ponytail is stylish enough to compete with one of the many Jolie Pitts. In fact if Ange herself wants to come over and wrestle Kraken Junior’s noggin into some sort of style she’s welcome to try it.

Anyway, on the list of must-haves in a day’s parenting, how hair looks comes way down the list. It takes enough of my energy to keep Kraken Junior fed, watered, alive and just generally clean-arsed. If we get to the end of the day without wounds that need to be stitched or questions from Social Services to be answered it’s been a raging success. Frankly, by bedtime, if Kraken Junior is in one piece I wouldn’t give a shiny shit if she was actually bald.

Perhaps Fabriah.com thinks that this survey is going to shove its sales through the roof but it actually makes me want to buy shampoo from British Nuclear Fuels instead. If there’s one thing I am going to do as a mother it’s protect my uterine produce from the wild erosion of childhood at the hands of the bloody beauty industry. I may be a sucker for highlights and eyeliner as a grown woman but I’ll be utterly fucked if my kid will be before she’s even grown pubes.

Which means Fabriah.com can shove its shampoo right up its plughole. Kids have enough to contend with as it is without booting them under the beauty bus. Suri, Romeo and Zahara can be as stylish as they like but my child will just be a child and you can’t get anything more gorgeous than that.

What do you think of this post?
Fucktastic (16) Interesting (0) Meh (0) Boring (0) Shite (0)
This entry was posted in Culture, Sleb and tagged children, fabriah.com. Bookmark the permalink.

4 Responses to Washed Up