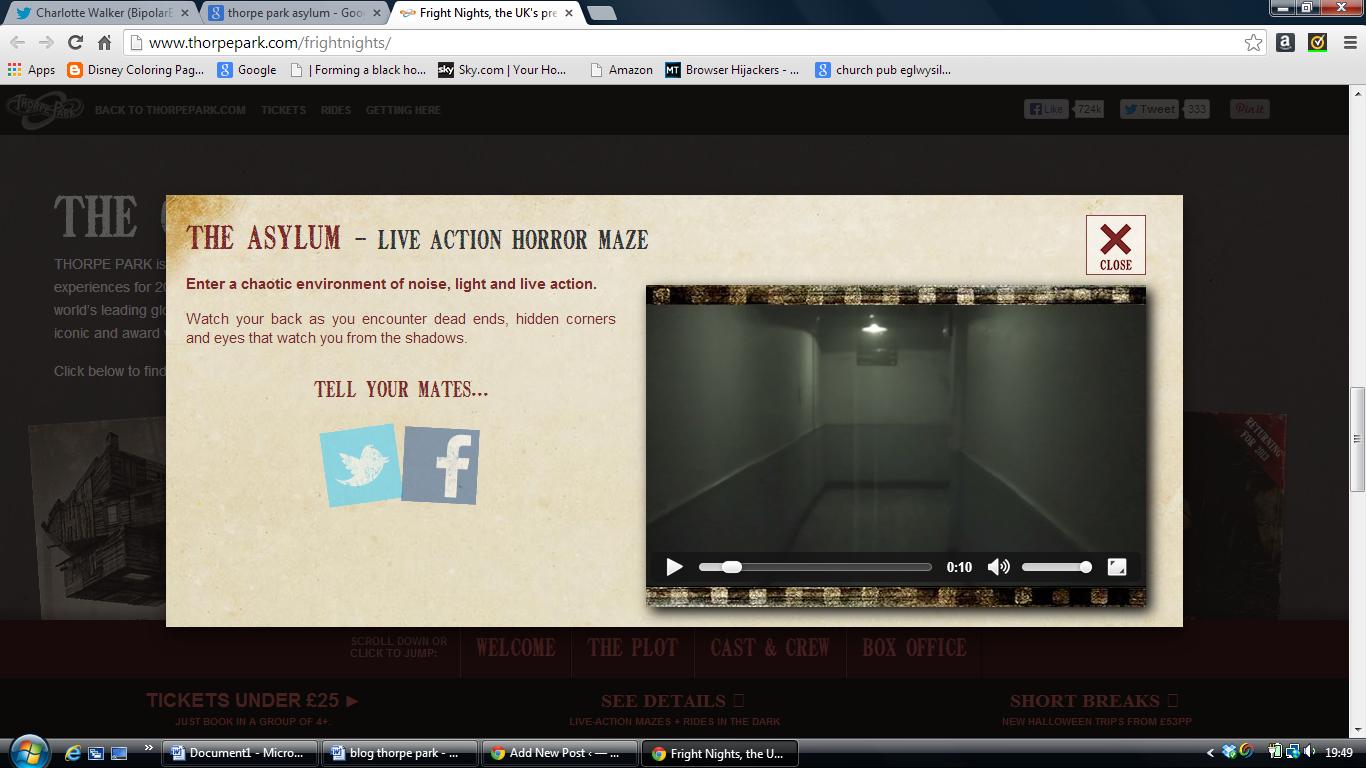 Oooh did I scare you then? No? Well I should have because I am, after all, a bug-eyed mental patient straight out of your new scare-the-shit-out-of-customers “experience” The Asylum. That’s right, The Asylum, that corner of your overpriced theme park that you’ve dedicated to Halloween 2013 by transforming it into a psychiatric hospital that’s been over-run with mentally disturbed, blood- stained, wild-faced, screeching, axe-flinging patients.

Forgive me for using such crude language as ‘mental patient’ and ‘maniacs’ but I thought it best to start in a way that you would understand. I mean, you’re clearly not up to date with how we treat people with mental health issues in the 21st Century are you? Perhaps you’ve never heard such phrases as ‘mental ill health’ or ‘psychiatric care’ because you are so busy assuming that anyone who suffers from the likes depression, bipolar disorder or schizophrenia are still treated by being left to chew on their own toes in padded cells. Or perhaps it’s because you’ve flogged so much candy floss over the years that you have it stuck in your fucking eyes.

Well, thanks for that Thorpe Park. There I was thinking that my Halloween experience would involve scavenging sweets from neighbours with my five year old daughter but instead you’ve decided to trick or treat me instead just because I’ve had depression. Although why you had to go to such lengths as this I don’t know. You could, instead have just come over to my place to lob eggs at the windows in retaliation for my brain having a chemical imbalance. Or perhaps you could have shouted “freak!” though my letterbox before running away.

You didn’t though. Instead you opened the Asylum in the name of festive profits, taking a monster shit on everyone who has ever suffered from mental ill health. That scares me far more than the bunch of underpaid, face-painted students you’ve hired to fling themselves around your fake wards in an effort to stigmatise the mentally ill. That’s because for every person you attract there’ll be another who is left feeling about as unattractive as it’s possible to be without being smeared in fox shit. They’ll be left feeling lonely, isolated, unloved, uncared for, abandoned and terrified of their own thoughts simply because you’ve told them that psychiatric care is scary and ugly.

Tell me, have you ever been in a psychiatric unit? No, I didn’t think so because if you had you’d know one fuck of a lot better than to portray them like this. Well severe depression rendered me a psychiatric patient and thanks to the likes of you, when I first stepped through the unit’s doors, I was so terrified that Conjugal Kraken had to lead me in by the hand. Even though it promised to save my life, after years of being exposed to images and stories of flicker-light corridors, dank cells and hollering, wild haired women I genuinely thought that I’d be locked away, never to be seen again. And that’s exactly how you are making people with mental ill health feel right now, as if the light has been stolen from them. You must be so proud as you wipe your arses with twenty pound notes.

The fact is that psychiatric units are fuck all like The Asylum. The ones I have seen have been clean and bright, walls covered with crafts and rooms populated with staff who are desperate to provide care, support and good, strong tea. In fact the unit that helped me survive my suicidal urges became the equivalent of a womb where I was safe, warm, understood and accepted. Even now that I have recovered from my breakdown I know that I could turn up unannounced in a moment of crisis and find someone to hold my hand. And you know what? At no point did I or anyone else run screaming along a corridor while waving a fucking chainsaw in the air.

Ironically, though, that’s exactly what you make me want to do. What I’d give right now to rampage through the corridors of your HQ, yelling at your execs and rattling my pills in your faces. I’d show you that it’s not mental ill health that creates the nightmares, it’s the grasping fuckers like you who insist on making a genuine illness a thing of fear. Believe me, Thorpe Park, it’s not me who needs to be locked away. It’s you.

NB: Support the fight against The Asylum at #AsylumNO on Twitter.

What do you think of this post?
Fucktastic (19) Interesting (1) Meh (1) Boring (2) Shite (11)
This entry was posted in Culture, Public and tagged Asylum, depression, mental ill health, Thorpe Park. Bookmark the permalink.