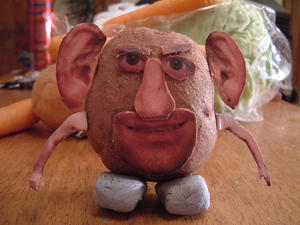 Fuckadoodle-doo. You know what I’ve discovered recently? That there are many and varied downsides to being rushed into hospital with facial cellulitis (gird yourself before you google the images) but none of them as bleak and lobally punishing as the television I’ve been privy to as a result. As an inmate on a six-woman ward, with one of said inmates hogging the remote like it was her own fucking pancreas, some of the shows I’ve seen did more damage to my body and soul than the infection I’ve been battling. And I just know you are dying for a breakdown of the lot of them, so here you go you lucky, beautiful bastards…

The torment began in the shape of Kate Garraway who roused me from my Ward 8 slumber by cooing over an upside down pudding like a pigeon with an easting disorder. Fuck-alone knows what show she was presenting. My guess is that it was called Breakfast for the Hard of Thinking, such was the staggering vapidity and intellectual encockment of what I was being presented with. And it didn’t get any better from there either. By the time she’d rubbed her crotch against this season’s accessories and blown kisses up the starfish of some soap actress or other I was writing DNR on my own medical notes.

I must have passed out at that point and missed the entirety of The Jeremy Kyle Show because when I came to it was time for This Morning, hosted by Jenny and Jeff. Tell me, were those guys found inside a small, Swiss clock? What a pair of fucking woodentops (and I speak for their tans as well as their ability to present a show with any hint of humanity). For the next two hours they guided me through what I can only describe as the lower-intestine of television, its colon being yet another TV fucking chef, its rectum being a debate over whether a woman should grow her armpit hair and its anus being the point at which Jeff cheerfully announced that after the break he’d be chatting to a man whose fourteen year old son had died in his sleep.

The next thing I recall was a three-course evening meal of soap operas in the shape of Eastenders, Coronation Street and Emmerdale the storylines of which are interchangeable depending on their proximity to hay bales, cobble stones and potato-faced cockneys. Eastenders was so overpopulated with chip-eaters scowling at each other from behind market stalls that I expected to see Charles Dickens propping up the bar in the Queen Vic.

Emmerdale then treated me to a funeral where overplucked women screamed at underplucked men and a bald woman wept as inconsolably as I did when I realised that the ward didn’t have Sky+ for us to skip through the adverts. It was so mawkish and indulgent that Equity called because it wants its cards back. Then again, it was infinitely more enjoyable that Coronation Street which had the same effect on me as the removal of my anti-depressants. Every time Rita, Sally and Gail came on the screen I wanted to weep for how fucking often they’ve had to feign surprise/ fear/ rage/ infinitesimal boredom in a booth at the Rovers.

Of course, this lot was the equivalent of an Icelandic art-house film festival compared to Big Brother. Tell me, why in the fuck is Channel 5 spending money on staring at arse-handles in a secret house when it could have done it in Kraken Junior’s schoolyard for the price of a CRB check? Five year olds display more nous, sensibility and bowel control than the sofa-bound gurners on that show. I shit you not, at one point one of the contestants actually shrieked, “No way! You mean you can actually go to Liverpool on a train?”

And this was all topped off by what Conjugal Kraken likes to call Casuality. I only got a twenty minute snatch of this but for that I was grateful. I am astounded that the brains behind this series actually think it’s normal for the staff of a hospital to conduct their private lives over the beds of the sick and the dying. If, during my hospital stay, a pair of doctors spat suspicions and bitterness at each other as they were draining my bladder of lady-lemonade I’d run at the fuckers with a stolen scalpel.

All of which are reasons why I never want to go into hospital again. My fear isn’t based on my punctured veins, having a laryngoscope shoved into my gullet or being poked awake by a nurse every 45 minutes for seven fucking days. It’s based on the fact that ITV and Channel 5 are piped directly to the beds of the weak and the vulnerable, like a stab at mass euthanasia. Believe me, if that’s treatment you can kill me now.

What do you think of this post?
Fucktastic (23) Interesting (0) Meh (0) Boring (1) Shite (2)
This entry was posted in Culture, Personal, Public and tagged Coronation, Eastenders, Emmerdale, hospital, TV. Bookmark the permalink.