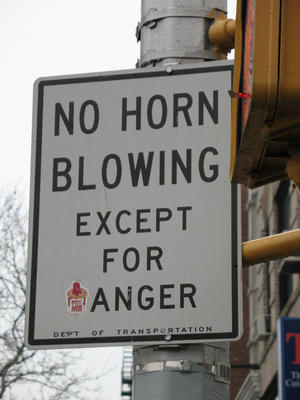 Kraken-lovers, you know by now that my relationship with fellow drivers is so badly strained that it looks like a turd that’s been sieved into a mixing bowl. From the moment I slip behind the wheel of my car I am assailed by levels of twatitude hitherto unseen outside of the mind of Joey Essex. However, the roads are inhabited by an even greater enemy than BMW and Audi drivers thanks to the tarmac-shagging cone-fumblers who attempt to repair said roads at any given opportunity. That’s because, when they have finished their crack-papering, they leave the byways of the nation littered with phantom fucking road signs.

You know what I’m talking about, the matrix, gantry and metal signs that decorate our roads demanding that drivers slow down, give way or merge into one lane even though the reason for said manoeuvres has long since buggered off back to where it came from. Here’s an example: recently I chugged along the South Wales section of the M4 in a two mile tailback caused by signs warning drivers that the Bryn Glas tunnels contained such a hazard that the two motorway lanes had to merge into one. Yet after the sphincter-clenching faff of a thousand bewildered drivers weaving, ducking and braking I got to the tunnels to find… nothing. Nada. Nought. Fuck fucking all. It wasn’t the traffic that was the problem, it was the cataclysmic bell-ends who left their pointless messages across the motorway for the rest of us to deal with.

Why in the festering segment of a lousy knacker are these road workers so incapable of mopping up after they’ve done a job? Think of all the people involved in rigging up roadworks, from the council and the Highways Agency through to blokes staring into holes and casuals lobbing traffic cones from the back of a truck. Yet at no point does even one of them turn to a colleague to check that the two miles of motorway litter telling drivers to crawl at 30mph has been cleared away. No, that’s because these smog-smothered road monkeys are leaving the scenes of their traffic crimes by driving their vans like they stole them.

I dunno, perhaps these guys travel to work by magic carpet which means they’ve never actually suffered at the behest of an abandoned and defunct speed limit. Or perhaps they’re so desperate to get home so that they don’t have to take a shit in a lay-by portapisser that the ensuing traffic carnage means nothing to them.  It’s no wonder that so few drivers give a shit about roadside instructions. It’s because they are the highway equivalent of a Grimm’s fairytale. Seriously, I’d be more inclined to believe signs that told me I’d soon encounter a unicorn giving birth to a steamliner.

Anyway, knocker-phobic parcel delivery drivers notwithstanding, can you imagine what would happen if other professionals took the same attitude to their work? Brain surgeons would tinker with frontal lobes before letting their patients stumble about with open windows in their skulls and hairdressers would lose interest after hacking away at only one side of a client’s head (as proven by Miley Cyrus). Farmers would leave half of their sheep to be ravaged by foxes and teachers would leave classrooms looking like Somme sites because they’d have run like fuck the moment the kids gushed into the yard at 3pm.

Then again, perhaps I have this all wrong. Perhaps this determination for roadworkers to weave webs of lies across the nation is a sign of their staggering creativity. What else could they come up with to keep us drivers entertained, I wonder? They could close the M6 because of an imagined terrorist attack by thrushy squirrels or cordon off the Severn Bridge as a result of a tanker spilling its regret all over the carriageway. Then again, why bother to come up with reasons to create highway chaos at all? Instead, vans of blokes could roam the country just to fling warning sides onto verges like confetti-flingers at a wedding.

All of which is why my respect for road-workers is diminishing as quickly as an empathetic brain at a Tory party conference. And yeah, they do the round-the-clock, dirty and cold work that I’d hate to do but it is really too much to ask them to do it properly? So unless they want to see a sharp rise in vehicles indulging in rage ramming they need to wipe their arses after they’ve taken a roadside shit. Now that’s what I call a warning sign.

What do you think of this post?
Fucktastic (2) Interesting (0) Meh (0) Boring (0) Shite (3)
This entry was posted in Culture, Public and tagged drivers, driving, roadsigns. Bookmark the permalink.