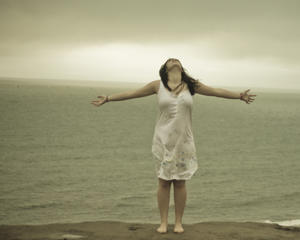 Holy shit on a badger’s hammock. Robin Thicke, the pop-bothering flap-mouth behind the current No 1, Blurred Lines, must be chuffed to shit with the UK’s latest development. That’s because Charles Saatchi seems to have taken Thicke at his word and, in publicly throttling his wife Nigella Lawson, has tried to create some blurred lines of his own. Yes, in the last few days it’s as if a crack has opened in the Earth’s crust and all the steaming demons in damnation have tumbled out of it.

Well, that’s the only reason I can think of for the actions of the cash-bloated, art-shagging, cancer-breathing, open wound and all-round unravelling of humanity otherwise known as Charles Saatchi. Between him and Robin Thicke womankind is being dragged backwards into an alleyway and left for dead. As a kraken of the female variety myself, it’s a bit like that scene in Rosemary’s Baby when Rosemary looks into her demonic baby’s eyes and realises the hell that has been unleashed.

First Robin Thicke is at No 1 in the charts for three weeks with a set of lyrics that makes the Yorkshire Ripper look reasoned. Then Saatchi is photographed several times in The Sunday People with his hand around his sobbing wife’s throat, treating us photos of Nigella that she never intended to be part of her domestic goddess image.

Problem is that Saatchi then goes on to createthese blurred lines by giving an interview to the Evening Standard, the paper for which he spews a column. There he describes his abuse this way: “About a week ago, we were sitting outside a restaurant having an intense debate about the children, and I held Nigella’s neck repeatedly while attempting to emphasise my point. There was no grip, it was a playful tiff.”

Saatchi has to be fucking us with this. He really is an echo of Thicke who similarly insists that he’s just having fun when singing, “Baby, can you breathe?” I wonder if Saatchi uses the same line on Nigella? It’s the equivalent of Harold Shipman saying that he’d accidentally written the wrong prescription a couple of times.

And what’s really making me shit bullets is the nation’s response to all of this. Really, did someone creep into our bedroom during the night and erase the moral centre of our collective brain? See, rather than Thicke’s song being banned it’s bought by the thousand and kept at No 1. Rather than Saatchi being sacked from the Evening Standard, he’s allowed to give his version of a scenario that, from where I rage, is cut n dried. Oh, and Nick Griffin, the saint of the skinheads, also tweets the words, “If I had the opportunity to squeeze Nigella, her throat wouldn’t be my first choice.” Well if I had the opportunity to squeeze Nick Griffin, his throat really would be my first choice and until he’d turned blue.

And you know the worst thing about all of this? It’s that every woman who has been harassed, abused, controlled or raped is left with the message that her ordeal is up for both debate and interpretation. Imagine it, pitching up a police station or refuge only to be asked to define the word ‘slap’. Well that’s the world that Thicke and Saatchi want us to live in and while we keep giving them such platforms as the charts and the media to spaff their twisted morals, that is exactly the world that we will live in.

So you know what I’d like to do? I’d like to lock Thicke, Saatchi and Griffin in the same room and let them all fight it out until they’re dead. Imagine how blurred the lines would be in there. Throttling would be ‘fanciful’ and groping would be ‘tickling’. In fact they wouldn’t need physical violence at all. They could just confuse each other until their minds give out. Then hopefully that crack in the earth will close up again and suck every one of the fuckers right back into it.