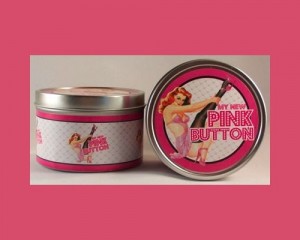 Hot bollocks on a foaming carpet of shit shards! Kraken-lovers I have something to show you but you have to be warned first. It is something that will either fundamentally shatter your frontal lobes or make you gouge out your own eyes with an assortment of cutlery. In fact, for those of you of the female persuasion, what you are about to read is also likely to make you clutch at your own muffly cavern in panic and desperation. So, ready? Really? Good, because today I bring you My New Pink Button, dye that you actually apply to your lady-flaps.

No, I’m not shitting you. I wish I were, although in case you don’t believe me here are a few more choice cuts from the product’s website that purports to “to restore the youthful pink colour back to your labia”. Apparently it’s been created by a woman who was shocked, mortified and disgusted by “her own genital colour loss” so she created “Bettie” a “shade that blends with a woman’s own skin tones to bring out that “sexy hot pink, I am fired up, look”. Said puffery then urges those women who fret about their mud guards to “Go dancing this weekend and remember to bring “Bettie” along!”

I barely know where to begin with this but just for you I’ll have a stab. For a start the colour of my meat curtains never actually crossed my mind until I saw this website. In fact I couldn’t have told you if my undercarriage was pink, blue or neon fucking green. That’s because I genuinely don’t give a shit. It’s not me who has to stare at it, it’s Conjugal Kraken in a rare moment of nuptial delirium and, once, Kraken Junior when her nose was snagged in it during childbirth.

Yet said website blarts apparently comforting advice about perishing labia as if women across the globe are bent double over their toilets while gawping hysterically at the greying mass of flesh their vaginas have become. Sod the fact that half of the world is starving, war torn or drowning in recession because what really matters are those folds of skin that cling to our tampon strings. In fact, the website announces so confidently that this is what women have been waiting for that the remains of Emmeline Pankhurst must be going on hunger strike again even as I write.

Worse is the creepiest word I have ever seen in this context: youthful. In blurb that could have been written by Stuart Hall himself, My New Pink Button promises to make our muffs look like those of… well, who exactly? Twenty year olds, fifteen year olds, five year olds? That’s because to the festering fuck-balls behind this product youth is clearly what the fundament should be about. I mean, imagine the mortification of pulling a guy, taking him home and dropping your kecks only for him to cry out in horror, “But you have the flange of an adult!”

Oh, and don’t go thinking that this is about women or their self confidence either. The fact that the website urges women to take this stuff with them on a night out suggests that their priority should be presenting their most youthful love bucket to whichever guy they are lucky enough to shag. That’s right girls, don’t worry about personal safety or contraception because what really matters is showing the man you’ve just met that your foof is gagging for it. How could you be so mean as to not apply this stuff to your flappery-pokery and expect your suitor to chow down on something that looks like it belongs to a normal woman?

And there’s the, er, nub of the problem. Once again women are being urged to resist the natural aging process to the point that we should apparently even try to erase the wear and tear on our own love nooks. Indeed, swiping this stuff over a luge is tantamount to discarding an entire existence as a grown woman whether that involves a frenzied sex life or multiple experiences of childbirth. Yet, from where I stand, if a 40-something woman really did present the vag of a teenager she’d probably be fresh from the village of Stepford.

Which is why I am going to write to the producers of My New Pink Button to ask them when they’ll be launching My New Hot Cock. That’s right, it’s a dye that hides the unsightly veins and folds that plague many a modern penis, an affliction that renders them anything but youthful. Sounds ridiculous? Yeah, and that ridiculousness also applies to my flaps. Oh, and I don’t need to tell My New Pink Button where to shove it because, let’s be honest, it’s been staring at that orifice all along.

What do you think of this post?
Fucktastic (41) Interesting (1) Meh (2) Boring (2) Shite (3)
This entry was posted in Culture, Sexism and tagged labia, My New Pink Button, women. Bookmark the permalink.

11 Responses to Press the Button