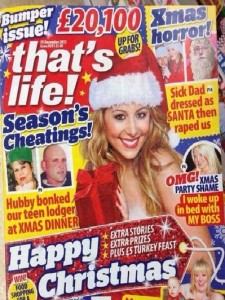 Oh, my eyes! Oh, my poor pulsating baubles of orbital sight-spaff! Kraken-lovers, if there was ever a time to gird yourself against festive horrors this, by fuck, is it. For I am about to show you something so spleen-achingly bleak that I’m offering you and everyone else reading this blog post a nip of brandy. No, not just to quell your tremulous nerves but to revive you once you’ve realised that what you are about to see can be found on coffee-tables nationwide, much like  a toddler’s snot overshooting a hanky. That’s because this Christmas the killer headline on That’s Life magazine’s cover is Sick dad dressed as Santa then raped us.

Readers, I’d give my left love-flap to tell you that I am making this up but I am not. It’s as if the barrel scraping word-muggers of That’s Life have mistaken child abuse for yuletide joy and decked their halls with the stuff. Hey! Who need’s Christmas champagne when you can swig tears instead? Thing is, Sick dad dressed as Santa then raped us isn’t all the cover offers us. That’s Life also tempts us in with Hubby bonked our teen lodger at Xmas dinner, I found mum murdered under my Christmas tree and, bewilderingly, Mum’s Xmas miracle: a ghost gave me triplets.

What in the staggerment of elfish bollocks is going on in That’s Life’s editorial department? You see, while I never expect such a magazine to run with in-depth coverage of the latest CERN findings or the growing plight of remote tribes in Papua New Guinea, I as sure as shit don’t expect it to use rape as a festive marketing ploy. And yeah, while the mag isn’t unfamiliar with this type of story, does it have to make the headline so festive looking? Not only is it printed in Crimbo red, it’s alongside the face of a grinning model in a sexy Santa outfit. That’s right because nothing says Christmas like teaming a come-hither gurn with the word ‘raped’.

And while we need to talk about rape, its impact, the victims and the people who perpetrate it, we as sure as shit don’t need to give it this sort of treatment.  Seriously, if this headline didn’t include the word ‘rape’ you’d think That’s Life was advertising a competition to win a trip to Lapland, such is the joyous way in which it is presented. And if the mag can’t treat such a life-shattering crime with the seriousness with which is deserves I suggest that it stays the fuck away from the subject and focuses on bingo and kittens.

Worse – because cock-knockage like this always gets worse – this is a magazine that is aimed at women. That’s right, it’s not Nuts or Loaded that’s treating rape with frivolity here, it’s a magazine that’s bought by the very gender who suffer from the crime the most. And thanks to the Santa-strewn splash the mag takes the headline beyond the realms of prurient interest and into the territory of festive fun. Want to get into the party spirit, girls? Then read about what it’s like to have your own father abuse you while Noddy Holder yodels in the background.

Seriously, if women can’t keep the fun out of rape then what hope do we have for men to do the same? Imagine the bloke who comes home to find this issue of That’s Life on his coffee table. He’s not seeing the message that rape is an evil perpetrated by men who need to have their cocks dipped in frozen carbon dioxide before being thwacked with a meat tenderiser, is he? No. Instead he’s reading about rape because it’s become another form of entertainment.

Fuck knows where That’s Life will go after this. Perhaps it’ll ask readers to mark out of ten the scars of acid attack victims in time for Halloween. Or perhaps, for Valentine’s Day, it’ll run a domestic violence special where women can boast about their partners’ punches being more romantic than roses. I mean, why stop at festive rape when the varied abuse of women is a gift that keeps on giving?

That’s why the best thing That’s Life could give its readers this Christmas is the news that it’s closing down. In a year when feminism has dominated the headlines and the Everyday Sexism Project has highlighted the inequality of women, That’s Life is acting like Jim Davidson at a Page Three party. Happy Christmas? Not while this party pooper is on the shelves, it bloody well ain’t.

What do you think of this post?
Fucktastic (25) Interesting (0) Meh (0) Boring (0) Shite (4)
This entry was posted in Culture, Public and tagged rape, That's Life. Bookmark the permalink.

One Response to Page/ Stomach Turner