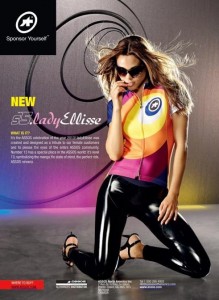 You know what? I’d rather not be privy to a daily digest of cocketude and piss-idiocy but, sadly, I am. Today isn’t even a fleeting shadow of an exception thanks to kraken-lover of staggerment, Jon Smalldon, because he’s kindly furnished me with one of the most fuck-handed advertisements I have ever seen.  Blame pedlar of cycling clothing, Assos, and its attempts to turn female cyclists into toss-fodder.

Go on, check out the ad above. It appeared in Peloton magazine to flog a cycling top named SS. ladyEllise (the SS Enterprise was already taken), although the model in the ad looks more like she is flogging condoms than planning to attempt the Tour de France. She may be sporting said garment, yet for some reason she’s in a porn-pose and, from the waist down, wearing rubber and stilettos. I dunno, perhaps they’re cycling stilettos with a particularly aerodynamic four inch heel or perhaps being on her knees is a sign that she’s hoping to make it into the Olympic team. Either way, I can’t se Bradley Wiggins adopting these apparent career-boosting methods any time soon.

And it gets worse. You see, the blurb that goes with the ad crows that this top was “created and designed as a tribute to our female customers and to please the eyes of the entire Assos community.” No. I haven’t made that up. “To please the eyes of the entire Assos community” is exactly what it says. And when another part of the ad claims that this is all about having “the perfect ride” I’m don’t know whether it’s talking about cycling or sex. In other words Assos is flogging this top to women but nudging its mates, sniggering and asking said women to flash her tits. The sexism isn’t so much implied as it is hollered through a loud hailer.

Now, I’m not saying that female cyclists can’t be sexy. Believe me, if Victoria Pendleton, Laura Trott and Danielle King want to break records in cling film, nipple tassels and Laboutins then they should go for it. Yet I have no idea why Assos feels it has to actually shoehorn sex into its ads for women. It wouldn’t be so incongruous if the men in their ads were flogging leggings and jackets by suggestively licking their lips but they aren’t. Instead they look like serious sportsmen while the corresponding women look as serious about sport as a barrel-load of owl pellets.

Oh, and don’t go thinking that this is a one-deal slip-up for a company that usually portrays its female cyclists as strong, powerful, determined and ambitious. You can drop kick the bollocks off that particular assumption by looking at its product pages. Apart from the fact that products are labelled ‘Men’ and ‘Lady’ they are also given entirely different treatments. The models pimping the male clothes are blank-faced, dead-eyed and staring straight ahead with arms stiff at their sides. The women, though, are in various pouty-lipped, lust-eyed, hip-thrusting, toe-pointing positions while draping a hand or arm over their naked tits.  In fact, so different is the treatment of the male and female models that they don’t even look like the product of the same company. In fact, the women don’t even look like they belong on a cycling website, not unless staring at a camera like you want to give it a blow job makes bikes go faster.

Fuck knows why Assos thinks that it needs to treat male and female cyclists so differently. I have no idea how seriously women are taken in the world of cycling, but if this ad is to believed they are endured just so that men can stare at their arses when they’re crouched over handlebars. That’s the only reason I can come up with for why this ad would tell them that their speed, agility, prowess and endurance mean nothing compared to whether they supply fellow cyclists with so much eye candy that they slip into diabetic comas. You’d think that in the aftermath of the 2012 Olympics, where female cycling has been elevated to an even higher level than usual in the public consciousness, we’d be celebrating the strength of women rather than male assumptions about the availability of their vaginas.

More than that, I am as sick to fuck as I can possibly be of sexiness being slowly injected into every aspect of a woman’s life. Look, this isn’t because I’ve been possessed by the spirit of Mary Whitehouse but because, thanks to Assos, even female cycling has to be about doling out stiffies. I assumed that when a woman is belting about on two wheels at 30 mph she’s free to not give a shit about whether she is puffing, sweating, muddy, aching or grimacing as long as she is enjoying it or getting a PB. Now, she has to look like she is gagging for it as well. It’s already happened in swimming and tennis where Rebecca Adlington and Marion Bartoli respectively have been criticised for not being model-like. I hope to fuck that female cyclists are not going the same way.

Which is why Assos needs to ask itself what it wants of its female customers: loyalty, community and spending power or the distinct impression that they’re only valued for their tits and arses. I don’t know which marketing wank-fest came up with this ad but he (because I’d readily bet my right kidney on it being a ‘he’) needs to be careful because 1976 called and asked for its inequality back. And unless Assos wants to stay in 1976 it really does need to get on its bike.

What do you think of this post?
Fucktastic (39) Interesting (0) Meh (0) Boring (0) Shite (3)
This entry was posted in Culture, Sexism and tagged Assos, cycling, women. Bookmark the permalink.

7 Responses to On Yer Bike