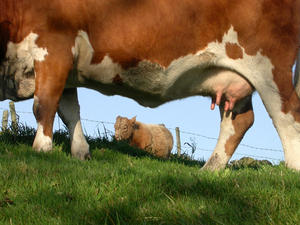 Ok, so I’ve had another one of those moments so swathed in derangement that I’ve had to check the dosage of my meds just in case they’ve been making me hallucinate. Thing is, even though what I am about to tell you is true I’m still hoping to fuck that the whole thing is a sexist ruse to make me invert myself with rage.  That’s right, I’m referring to the latest foodstuff fuck-up at the hands of Muller yoghurts. That’s because they’ve actually gone and made gender stereotyping edible. I shit you not, Muller is now making corner yoghurts specifically for girls and for boys.

No, I’m not making any of this up. Indeed, Muller is now marketing its plastic pots of pasteurised, bacteria-riddled cow spaff at girls by decorating its pots with shoes while it’s marketing the stuff at boys by decorating their pots with rockets. Which means, kraken-lovers, that we are now in the territory of gender-specific supermarket fodder, much like selling bananas to boys because they look like cocks and oysters to girls because they resemble over-excited foofery-pokery.

Can someone explain to me what in the embogglement of fuck is going on here? It’s as if Muller has actually turned sexism into nutrition, although I’ll be fucked if I’m going to allow it to course through my own digestive tract. Not only is it telling girls that they have to be shoe-shaggers to eat their yoghurts but that boys have to be mini-boffins to boot. Christ knows, then, what Muller will make of the fact that Kraken Junior’s favourite dry pasta is shaped like rockets, comets, planets and stars. Then again, perhaps her stomach never got Muller’s memo that the female body must purge itself of anything but food that reminds it of how thick, vapid and gossipy it is supposed to be.

Look, you must have heard of the Let Toys Be Toys campaign which is working to remove gender bias from toys. Well something tells me it’s time for a Let Food Be Food campaign, which beats to death any manufacturer who dares to declare that girls and boys are so different that their bodies don’t even share the same arrangement of tastebuds and intestines. Seriously, throughout all of the sexism of yesteryear this has to be the first time in history – in HISTORY – that anyone has decided that children’s food needs to be divided along gender lines. Right now Muller is making Jim Davidson’s stage act look like a group of women with mirrors contemplating their own vaginas.

And yeah, I understand that this is about marketing but the marketing is telling boys and girls that they can’t even find common ground in pots of fucking yoghurt. So forget the games and clothes and books that insist that the genders are worlds apart. Now it’s food that represents the apparently gaping chasm between humans sporting either ovaries or todgers. Yet I refuse to believe that anyone actually, well, believes this. If I told five year old Kraken Junior that she could no longer eat the same food as boys she’d quietly and slowly reach for the phone, without taking her eyes from my face, and dial 999.

So why in the fuck not one person did this at Muller HQ is beyond me. Go on, think of it: the marketing meetings, the designs stages, the product testing… and no one put up their hand to ask why in the fuck Muller is dragging us back into the Dark Ages? Although, even that’s too modern for Muller. Even in the Dark Ages I’m pretty sure that men and women didn’t refuse to eat their gruel because it its connotations were too masculine or feminine.

And fuck knows what kind of edible path this actually puts us on. In fact, even George Orwell and Aldous Huxley would struggle with the inevitable consequences of Muller’s actions. Can you imagine us getting to the stage where we do such an efficient job of dividing food along gender lines that we have policed his n her supermarkets, just to make sure that the girls never venture into the realms of male food, for fear that their colons explode with cellular confusion. Or perhaps one of the genders can die at prematurely devastating ages simply because modern convention dictates that they aren’t worthy of vitamin D or leafy greens vegetables.

So Muller can shove its yoghurts right up its corners. At no point in the history of humankind have girls and boys been told what to eat depending on the contents of their pantaloons and I as sure as shit do not intend to start that trend now. In fact the only reason I can think of for yoghurt being marketed to women is in an effort to contain thrush which is handy because shoved where the sun doesn’t shine is exactly where Muller’s yoghurts belong.

What do you think of this post?
Fucktastic (30) Interesting (2) Meh (0) Boring (1) Shite (1)
This entry was posted in Culture, Sexism and tagged Muller, yoghurts. Bookmark the permalink.