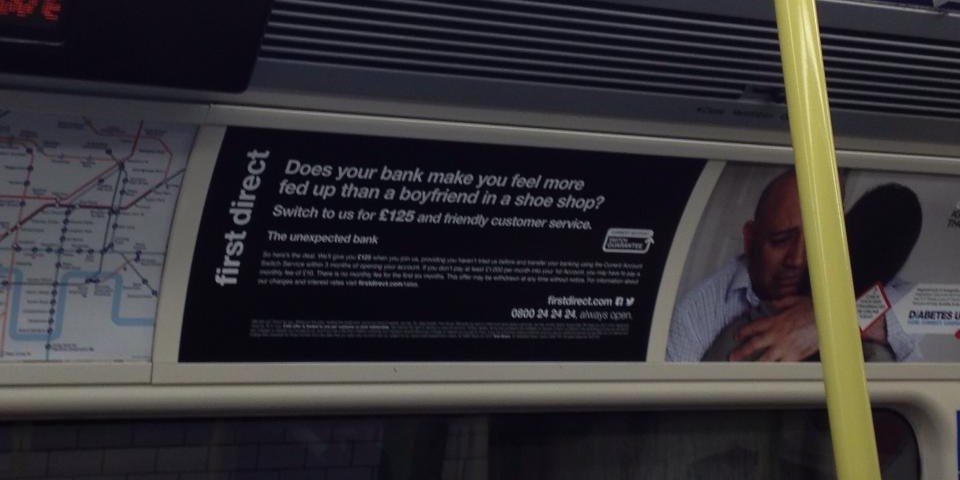 Who’d have thought that travelling by public transport could be so hazardous for our health? No, I’m not talking about the likelihood of falling under the Number 71 in the morning crush. I’m talking about the number of crotch-grabbers, thigh-strokers and ball-fumbers who inhabit the nation’s trains, tubes and buses, just in case the female half of the population doesn’t feel harassed enough. The only difference is that today it is money-humping First Direct that’s doing the harassing with its account-pimping arse-boil of a sexist ad.

You see said ad, which is above and was snapped by the glorious Tessa Morrison as she sat on the tube, is only one sentence long but I think it may have given me permanent brain damage with its wild layering of sexist stereotypes. It reads , “Does your bank make you feel more fed up than a boyfriend in a shoe shop?” before attempting to justify itself by offering customers kickbacks along with a level of customer service that, if this ad is any indication, it’s clearly unable to reach.

“More fed up than a boyfriend in a shoe shop?” It seriously took me several readings of that sentence to understand that First Direct has indeed put as much thought into this ad as my cat just did while taking a shit on my carpet. At first I assumed I’d read it wrong, so glaring is its assumption that heel-obsessed women are the bane of their boyfriends’ lives just by dragging them into Clarks. Then I read it again and realised that yup, First Direct should expect a call from 1974 because it’d like its sexism back.

Way to go, First Direct, in making sure that every woman who sees that ad immediately opens an account with Barclays, not least because you’ve managed to wedge us into the tightest pigeonhole you could find. In fact the pin-striped cash-twatters should have just written the sum ‘women + trinkets = bitches’ and been done with it. Or perhaps it could have simply presented the travelling public instead with such imagined levels of male torment  as them having to talk about their feelings/ watch Coronation Street/ be refused a birthday blow job.

Oh, and that’s even before you dollop on the nagging that this ad implies, what with that poor boyfriend being dragged shopping by a woman. After all, what man doesn’t know the agony of being forced to watch his keeper simper and fawn over shoes? Well mine, for a fucking start. Perhaps First Direct would like to speak to Conjugal Kraken about our wildly modern relationship where we are physically capable of purchasing footwear without clinging to each other like lobotomised chimps. Oh and no, I haven’t forgotten that said boyfriend mentioned in this ad could be in a gay relationship but seeing as First Direct’s culture probably hasn’t progressed that far I shan’t even bother with that one.

No doubt First Direct thinks this ad is funny. And no doubt right now someone in its marketing department is muttering about how I need to get a sense of humour. Yet I wonder how First Direct feels about presenting itself as so outdated that it may as well keep customers’ cash safe by stuffing it in a mattress? That’s because this ad doesn’t just pander to the stereotype that women are shoe-crazed but it panders to the stereotype of boyfriends and husbands as being cowed by them. It means that neither male nor female customers are winners because First Direct either thinks that women are harpies or that men are do-as they’re-told saps.

You’d think that if First Direct wanted to continue with its effort to make us feel fed up with our banks, it could be a little more creative. It could conjure up images of us dying in A&E queues, being trolled on Twitter by perverts or watching any given ITV drama. Then again it could also remind us of what it’s like to be patronised by a bank that should know one fuck of a lot better. Yeah, that last suggestion would do it.

Which is why I’d rather go to my grave with my only pennies resting on my eyelids than stuffed in First Direct’s coffers. You see, security and wealth aren’t the only things I want from my bank. I also want to be treated like an intelligent woman rather than have a First Direct representative to ask me how the doily-making is going should I ever call its helpline. Now, that’s what makes me more fed up than a boyfriend in a shoe shop. I wonder if First Direct will ever mention THAT on its ads.

What do you think of this post?
Fucktastic (19) Interesting (1) Meh (2) Boring (0) Shite (7)
This entry was posted in Culture, Sexism and tagged First Direct. Bookmark the permalink.

5 Responses to More Money Than Sense