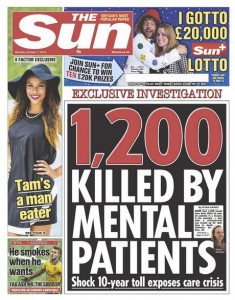 OK, so assuming that I haven’t just woken up in Dickensian London where people with mental health issues are bandied off to the scream-filled asylum on the corner, what in the flying fuck is The Sun up to? You see yesterday said newspaper (although I use that word so loosely it keeps slipping of the pages) decided to wake the nation with the words “1,200 killed by mental patients”. You can see the offending pic there on the left although I have to warn The Sun that after this “mental patient” saw it she was ready to live up to its stereotype and kill one of its fucking editors.

Seriously, did The Sun gargle with hot bong water over the weekend, because that’s the only reason I can find for a headline of such staggering insensitivity that it may as well include a pic of that Asda costume. Now, the paper printed the headline to draw attention to its story about how many “high risk patients” with mental health issues have been let down by the system in the last ten years. In fact The Sun’s managing editor Stephen Abell stuck up for the story by tweeting: “But read full copy: call for better communication between agencies; piece by m-health charity; story on ill as victims?” Frankly, though, by the time the headline had punched the nation in the face, the rest of the article could have been about female pandas shooting heat seeking missiles from their vaginas. That’s because by then it was too late. The damage had been done.

I have no idea why The Sun thought that hollering at people with mental illness was a good idea in the first place. Even if the rest of the story took our side – I say ‘our’ because I am one of ‘them’ – the headline was the equivalent of a giant shit on our already troubled heads. Not only does the headline insist that people with mental health issues are potential Hannibal Lecters, it does nothing to support us nor does it attempt to distinguish one mental health issue from another. And yeah, I know there’s not much room on the front page of a paper when the font is gigantic, which is why The Sun should have simply shut the fuck up instead.

See, I have a long history of what the Sun would call mentalness/ nuttiness/ wingnuttery-wingpokery. Depression has kicked me in the bollocks several times since my teens, I’ve struggled with post-natal depression, post traumatic stress disorder and in 2010 I had a major breakdown which was generously garnished with suicidal urges. Most recently the result was a year of treatment at a local psychiatric unit and I now take anti-depressants and anti-psychotics in the same way that most people take sugar in their tea. And thanks to that little lot alone The Sun has decreed that, as a “mental patient”, I am to be feared.

Yet, do you know who I am most likely to be a threat to, thanks to my being ‘mental’? Me. That’s right. Me. I’ve thought of killing myself a thousand times but at no point have I had even a vaguest urge to gallop up to someone in the street and plunge a knife into them. In fact, when I am in the darkest pit of my depression you’d be hard pushed to get me to wipe my arse properly after taking a shit, let alone roam freely amongst the public as I decide which one of them I’d like to slaughter. In fact The Sun has flattered me with its notion that I am even capable of such exertion as a result of a mental illness that convinces me that I’m not worth being alive.

Apart from which, The Sun’s use of the term ‘mental patients’ is so wildly outdated that it may as well have carried a headline that read, “All mothers are slags!”or “Black people smell!”. Fuck the fact that the term ‘mental patients’ stopped being used by intelligent beings decades ago or that the word ‘mental’ in relation to illness can encompass anything from stress and anxiety to schizophrenia and serious personality disorders. That means that a good proportion of The Sun’s readers are ‘mental patients’. I wonder how loyal they feel to the paper today.

So The Sun can shove its headline right up it dark arse. If it wants to run stories about mental health issues it needs to understand that the words it uses are the difference between a reader seeking help and a reader indulging in an overdose. Although with any luck the only isolation the paper will have created with this headline is in making itself a pariah. Believe me, it’s not ‘mental patients’ that do the damage to society, it’s the fucking newspapers that stigmatise them.

What do you think of this post?
Fucktastic (28) Interesting (0) Meh (0) Boring (0) Shite (3)
This entry was posted in Culture, Personal, Public and tagged mental ill health, The Sun. Bookmark the permalink.

One Response to Mind Games