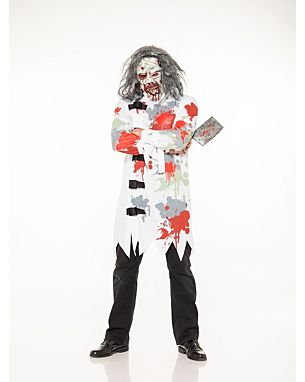 Well, well, well. What a triumvirate of bastards you shelf-shagging, money-licking, customer-abusing bunch turned out to be. Then again that’s what happens when, in the panicked dash for Halloween profits, you stock costumes of what you think are “mental patients’ replete with blood-splattered clothes and hatchets. And yeah, you might have since withdrawn these costumes from sale and even apologised for your actions but you’re just too late. You see, in the wake of this consumerist balls-up you’ve left millions of people with mental health issues feeling that little bit lonelier today, just that little less likely to seek help for their torment. I mean, hey! Why dress up as a vampire, goblin or the Grim Reaper when you could party like a young mum with PND or a middle aged man consumed by grief? Surely they have to be the scariest Halloween monsters of all, right?

No. Not fucking right. In fact not even one grasping nanosecond of what you have done, Asda/ Tesco/ Amazon, is right. That’s because your notion of what constitutes a “mental patient” is about as accurate as your use of the word ‘fresh’ to describe your shipped-in, mouldy-within-24-hours bloody strawberries.

Is this seriously how you think people who suffer from mental health problems look? That they stagger from one murder victim to another with a wild grin on their face because the demons in their heads are hissing “Kill! Kill!”? Well this’ll make you shit nuggets of your own ignorance because what a “mental patient” really looks like is… me. And just think! I might have sat next to one of you on a bus! You see, your idea of a mental health patient isn’t even close to the reality although perhaps I should thank you for giving me a helping hand with my personal style. You see, since suffering from regular phases of depression, PND, PTSD and most recently a complete breakdown I never know what to wear in the mornings. Now, though, I do. Who needs Anna Wintour, eh?

So where do you get off in telling the world that this is how people look when they suffer from depression, anxiety, bipolar disorder, schizophrenia, addiction, eating disorders or stress? No, I’m genuinely asking, when was the last time you saw a man, woman or child display the state of their mental health by dressing like Jason from Friday the 13th?

See, that’s because I am what you’ve called a “mental patient” and I’ve never seen one, not once, not even in all of the time I’ve spent in my local psychiatric unit. Although I gotta say, right now I’d like nothing more than to run amok through your stores with a cleaver but then that should come as no surprise to you, should it? I’m just living up to your stereotype. Living the dream, Asda! Living the dream!

In fact, just as astounding as your decision to flog a costume that mocks the mental health issues of millions of your customers is your lack of sensitivity towards your own employees. How many people do you employ Asda/ Tesco/ Amazon? Hundreds of thousands? Yet if your actions are to be believed you don’t seem to care that amongst that number are individuals who are either suffering from mental health issues right now or are living with people who do.

Go on, wander into the HR department and find out exactly how many of them there are. Some may be on medication, some may be on sick leave and, worse, some may not be on record at all because they are nursing suicidal urges that they are too scared to reveal. Way to go in building employee morale, guys. Take the most vulnerable people you know, people who are neglecting their health and families to make money for YOU, and point and laugh at them in your stores. My God, you must be proud.

Anyway, do you really want to know what a “mental patient” looks like? Then go find a mirror. You see, this bleak episode will mean that many an Asda/ Tesco/ Amazon employee will have gone home suffused with stress and feeling low in the last 48 hours. The PRs fending off journalists, the marketing guys taking stick from advertisers, the store buyers being bollocked could all, right now, be showing signs of mental health issues because they can cope with the pressure no longer. So perhaps next Halloween you could update your costume ranges by splattering your own store uniforms with blood and stereotypes instead. Offensive? Yeah, now you know how I feel.

Which is why the biggest horror this Halloween isn’t the prospect of being attacked by a “mental patient”, it’s knowing that you, Asda/ Tesco/ Amazon, three of the biggest retailers in the UK, think that those of us who’ve seen in the inside of a psychiatric unit are a piss-take. Call that customer service? Fuck no. I am glad, though, that I’ve seen who you really are. You see, I’ve never found shame in my depression but ashamed is exactly what you are right now. I call that one -nil to the “mental patients”, don’t you?

What do you think of this post?
Fucktastic (14) Interesting (0) Meh (0) Boring (1) Shite (3)
This entry was posted in Culture, Personal, Public and tagged amazon, Asda, depression, mental heaolth, Tesco. Bookmark the permalink.

3 Responses to Losing the Plot