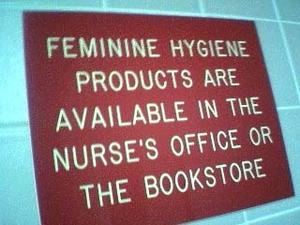 You probably don’t need to know this but my period started on the weekend. And while the vagaries of a kraken shedding the lining of her womb may be an entire blog post of its own, on this occasion I have something altogether more harrowing to blaze about. You see, in an effort to stem the crimson tide that was lapping at Kraken Bay I rush-bought an armload of tampons, only to get them home and discover that they re scented. What, may I kindly ask, the fuck?

I knew something was afoof when I opened the packet and was greeted with a niff as sickly as a panic-stricken beehive.  For a dizzying moment I though that, rather than straddling my toilet in an effort to contain the carnage, I was face down in a Wisley flowerbed. Then I realised that the item I was clutching was a fistful of pansies disguised as compressed cotton wool.

Why in a foundering tug of fuck does a tampon need to be scented? Seriously, in over twenty five years of wrestling with the disposal of my eggs, not once have I caught a niff of my outpourings and decreed that my vagina would be better served if it were stuffed with tulips rather than tampons. So for the brains behind the world’s favourite muffly plugs to decree that on my behalf has come as a shock.

I mean, it’s not as if I’ve had strangers back away from me at bus-stops because the gore puddling about my feet emitted a horrifying stench. And at no point has a family member taken me to one side to point out that I’m putting them all off Sunday lunch, what with my overpowering monthly reek ruining the aroma of the gravy. And, having spent my entire life in the company of adult women, not once have I had to use my sense of smell to gauge whether she is on day three of her period, as if she’s a pint of full fat that’s gone over.

In fact, when I spluttered my fevered rage about these products at an unwitting Conjugal Kraken he said, “They’ve made tampons that smell? Like what? Bacon?” Which is such an improvement on how Tampax are currently making them smell that I might patent it.

Thing is, scented tampons tell women one thing and one thing only: that our periods are a source of such shame that we should be confined to the marital chamber for the duration of our uterine seepage. Suddenly, the fear of leaking through our tiny, white hotpants while riding in the Grand National  is nothing compared to the fear that we are roaming the streets like Pepe le Pew.

Look, women have been told for long enough that they have to be perfect on the outside, what with the endless buffing, tanning, plucking, slimming, tweezing and smoothing. Now we have to be perfect on the inside too, that’s if perfect means having a vag that smells like Monty Don’s greenhouse. Although, why we are stopping here beats me. Perhaps we could fashion IUDs that emit a puff of jasmine every time a woman crosses her legs, what with our wombs being the broiling tar pits that create hellish-smelling menstrual blood in the first place.

Even worse, I don’t see men getting the same treatment, being hounded for having bollocks that reek of Camembert. If women have to conform to this staggering purging of their natural odours perhaps men should too. That’s why I propose the manufacture of intimate wipes for men that smell of petrol and beer.

So, no Tampax, you can shove your scented tampons in the very place that I won’t be. Really, if I want to persuade the world that my conjugal nook is a cunning replica of Tatton Park I’ll find a better way of doing it than inserting an Airwick device. I’m perfectly happy with the way I am, thank you. And yeah, that’s seeing red.

What do you think of this post?
Fucktastic (20) Interesting (1) Meh (0) Boring (0) Shite (1)
This entry was posted in Culture, Personal, Public, Sexism and tagged sexism, tampons. Bookmark the permalink.