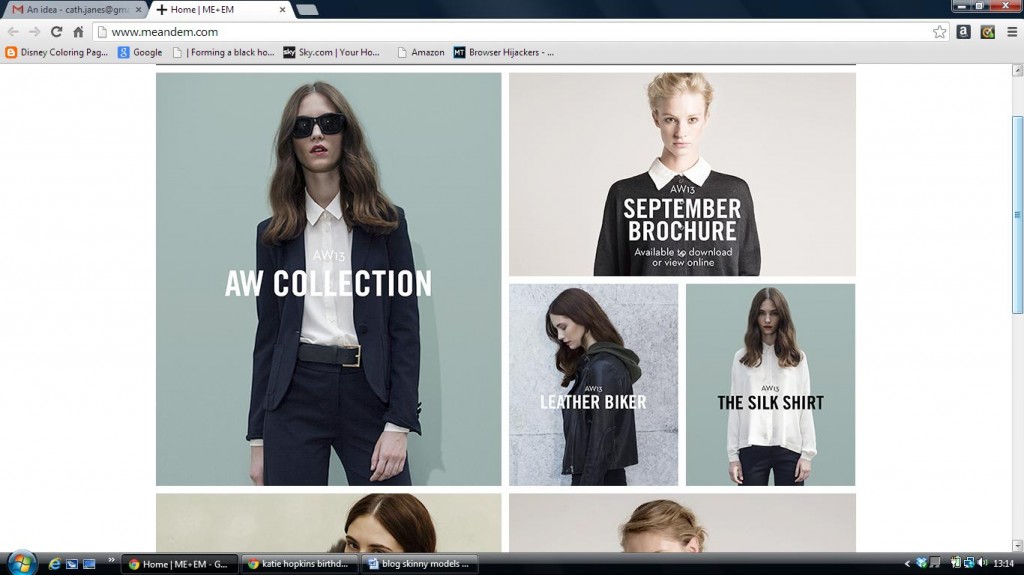 You know, after decades of watching the fashion world insist that women should only be allowed access to its wondrous realms if they can count their own ribs, it still manages to shock the shit out of me. And on this occasion the rather spectacular parenting journalist, Liat Hughes Joshi has pointed out to me its latest fuck up before running for cover under the nearest desk. Blame Me + Em, the online fashion collection that doesn’t just display the thinnest models I’ve ever seen but it claims that sizes 12 – 14 are (deep breath) ‘large’.

I’ll just let that sink in for a moment, shall I? You know, just in case you need to fetch a stiff drink before reading on. You can check out the fashion website here but if you’re confused when you reach it let me remind you that this really is fashion for adult women, women with tits, arses, hips and myriad other age-driven bulges. Forgive me if I’ve patronised you there but when I first alighted upon said site I thought it was flogging clothes to stringy, thirteen year olds who’ve yet to see the business end of a tampon. Worse, do you know where this site chooses to advertise? That’s right, Mumsnet, the home of women who have mutated into flying blimps before watching human beings emerge from own screeching love-tunnels.

For once, I barely know where to begin. Perhaps I should start by telling you that Me + Em also calls its size 10 – 12 ‘medium’ while labelling 14 – 16 ‘X large’ and 16 – 18 ‘XX large’. I have no idea when in the blistering pus-buckets of Satan’s lobotomy it was decreed that 12 – 14 equates to ‘large’, but has I been aware that it was happening at the time I’d have garrotted Tom Ford with a measuring tape.

To think of all the times I thought that hitting a size 12 meant that I was at a healthy weight, when Me + Em clearly thinks that this is a sign of my impending doom due to some freakish variance of obesity. Clearly WeightWatchers, Slimming World and every other dieting expert have got it wrong all along because women the world over should have been striving for pixie-like proportions rather any size that involves a lower double figure. I have no idea who is telling these people that a size 12 registers on the richter scale of morbid porkiness, but they need to be harpooned with arrows fashioned from common sense, frozen piss and thigh blubber.

And it’s this twisted notion of what constitutes a woman that’s driving a social stake through the brains of teenage girls everywhere. If I ever took my child into a store that replicated Me & Em’s sizing I’d take a shit in its changing room and never darken its door again. I can only pray that I am not alone, that parents everywhere will splutter their rage at the incandescent stupidity of a size 16 being called ‘XX large’ and immediately lecture their kids about how Me & Em is about as fucked up as it’s possible to get without injecting poison into the veins of newborn infants.

It’s even worse that these clothes are being flogged to mothers who are possibly at their most vulnerable, exhausted, stressed, unfit and desperate. After Kraken Junior splattered from my protesting fundament I felt a lot of things but body-confident was not one of them. Fuck knows what this website would have done to me had I attempted to order one of its shirts or dresses. I’d have probably beaten myself to death with a jar of Cow & Gate for allowing my tits to look anything but pre-pubescent, even though my arse had grown large enough to be orbited by its own moon. So how Me + Em really think that their models and their sizing have even the vaguest resemblance to ordinary woman and mothers, not least women who have undergone the natural and necessary body transformations to create its next generation of customers, is beyond me.

That’s why I’m as likely to shop at Me & Em for clothes as I am to shop at Broadmoor for a husband.  Regardless of the fact that I’d never even get my arm into some of its trouser legs, I certainly won’t support a website that thinks women are fat simply because they’re a size 12, a size that anywhere else is considered slim. I really don’t care how up to the minute its fashions are because it’s its notion of women that’s really out of date.

What do you think of this post?
Fucktastic (35) Interesting (0) Meh (0) Boring (2) Shite (0)
This entry was posted in Culture, Public and tagged fashion, Me & Em, mumsnet. Bookmark the permalink.