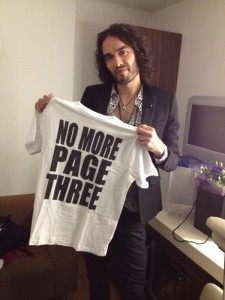 Oh for the love of fuck, will some of you just use your brains? Look, in the last few days an image of Russell Brand holding up a No More Page Three t-shirt has been spaffed across the internet along with his tweet that “through the love of a good woman, teenage, sexist me was slain”. I saw it and rejoiced, not least because Brand denouncing The Sun’s tit-obsession is the celeb equivalent of Ban Ki Moon denouncing genocide. Problem is that this globally-shared sentiment just hasn’t been enough for some feminists. That’s right, Brand, apparently, has let down womankind by not being perfect.

You know, as much as I cleave to feminism, factions of it repeatedly astound me with their purist bloody attitudes. You see, in this instance the ever-shagging Russell Brand is probably the last man you’d expect to lead a march for feminine equality. He’s not Jim Davidson but neither is he Caroline Criado-Perez. Yet even though he has made a step towards ending the sexualisation of women with his t-shirt waggling he still isn’t quite good enough for those feminists who expect perfection from their supporters. The result is endless fucking analysis about Brand, his intentions, his past and his future rather than simple happiness that today women are a step further forward than they were yesterday.

I seriously don’t give a shit about why Brand is supporting the No More Page Three campaign. In his photo perhaps there was an out-of-shot gunman making him hold up that t-shirt. Perhaps he’d been plugged into the mains and it was electrocution that was making his arms lift up. Or perhaps it was Jemima Khan, his girlfriend, telling him that if he doesn’t do it he won’t get a blow job. Whatever.

All I care about is that by doing so he’s dragged the issue further into the public domain and sent the message to millions of men that Page Three is a festering bowl of fowl-flobber. He has over seven millions twitter followers for fuck sake. Feminism couldn’t buy that type of advertising. Oh, and for those feminists who can’t reconcile hislatest act with his previous actions, don’t bother trying. Just view him as knot-haired, ball-grasping giant sandwich board striding the Atlantic instead.

Thing is, feminism always does this to itself and I despise it. Instead of enjoying our small triumphs we rail against anyone or anything that doesn’t fit our wildly exacting standards. This doesn’t mean we should put up with second best. It means that we need to welcome every act that supports us because it’s only millions of individual acts that can bring women equality. Or is feminism simply expecting one perfect individual to sweep us off our feet and solve all of our problems? We’ve fought the image of women being saved by a knight on a horse for decades yet when it comes to celebrity support a knight on a horse is exactly what we seem to demand.

It was the same problem with THAT Lily Allen video for Hard Out Here. Yes I hated some of the scenes in the video (the waggling arses) and some of the lyrics (the kitchen sneer) but I adored the sentiment, the feisty lyrical references and the ‘baggy pussy’ balloons. More than that it sparked fevered debate about women in music, made some men question what they expect of women and made some women go out into the world feeling better about their chances of survival.

Fact is that when we feminists pick apart the efforts of anyone trying to further our cause all we are doing is taking a giant shit on ourselves. Yup, nothing deters a new and tentative member of the cause than to scream at them because they once told a boy to “stop being a girl” or took a sexy selfie of themselves in a bikini. Everyone fucks up and everyone learns and if we are going to accept the help we need to change opinion we also have to accept that perfection isn’t a feminist pre-requisite.

That’s why I am right behind Brand’s photo. Even if for one day he has made Twitter explode with the debate of confident women and educated men he’d have done the feminist cause some good. Through his one small act and a sprinkle of his stardust he has also taken the No More Page Three campaign a step closer to its goal. Now if we could persuade everyone – perfect or otherwise – to perform one small act imagine what we could achieve after all.

What do you think of this post?
Fucktastic (33) Interesting (0) Meh (0) Boring (0) Shite (4)
This entry was posted in Culture, Sexism and tagged feminism, Russell Brand. Bookmark the permalink.