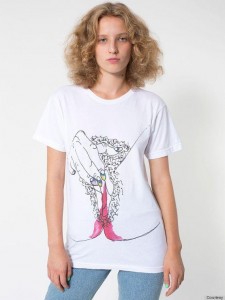 Hot tag-nut tombola! Look, I am assuming by now that you, kindly kraken-lovers, have seen the – yes, the – t-shirt by American Apparel that’s the equivalent of having a massive vagina plastered over your chest. That’s because said garment, pictured to the left of you, is exactly that. Indeed, if you are too scared to look it’s a sketch by Petra Collins, a Canadian artist, of a woman pawing at her love tunnel as menstrual blood seeps out of it. Even better, said muff is as hairy as a vole on testosterone.

Now, Collins says of the t-shirt, “This image is stating that women are not a subordinate creature to just be entered. We are our own beings control of our own sexuality. I find people are uncomfortable when a woman is expressing her sexuality instead of repressing it. In our society, nude or sexually suggestive images of women are automatically seen as negative. We need to make room for the female view of sex and accept it. Until then, people are going to be uncomfortable with work like mine.’

No shit, because the reaction to this t-shirt is as predictable a night of drama on ITV 1 what with such words as ‘disturbing’ and ‘vile’ being bandied about on Twitter. That’s right, because there is nothing more ‘disturbing’ and ‘vile’ than a woman’s body as it routinely prepares to be impregnated in an effort to perpetuate the human race. You never know, perhaps the Daily Mail and Radio 2’s Jeremy Vine Show could campaign to have periods banned altogether, when with them being such an affront to society. You’d think periods were the equivalent of women shitting out small, gnashing demons that eat babies while they sleep.

Yet, you know what offends me about this t-shirt? No, it’s not the image and no it’s not the fact that said image doesn’t contain nearly as many clots, stains or leaking tampons as it should. It’s that it has been created for American Apparel, one of the most misogynist companies on the planet. Collins’ blathering about putting women in control of their own sexuality with just one t-shirt pales significantly when compared with the other advertising campaigns American Apparel has indulged in over the years. That’s because they’re campaigns that make women look like fuck fodder for anyone but themselves.

Go on, check them out. There are these shots of a woman in a jumper but naked from the waist down (that have been banned in the UK), there’s this widely condemned campaign where a flannel shirt, modelled by fully dressed men, was modelled by a half naked women and finally these crackers which includes the infamous “Now open” ad. And you know how sexist and sexual they are? Even though they’ve appeared on billboards across the globe’s greatest democracy they’re not even safe to open at work. You’ve been warned.

So why has American Apparel had such a change of opinion? You see, I seriously do not believe that it has lurched from selling women as meat to being so in-tune with women that it’s eager to talk about periods. I do, though, think that American Apparel is doing this for shock far more than it is for the furtherance of the wellbeing of women. Yeah, yeah, it wants to flog its overpriced t-shirts but if it really wanted to send a message of respect to the women it’s shat upon over the years does it really have to do it with a doodle of an open and bleeding flange?

Had this t-shirt been produced by a company with a history of giving a shit about women I’d buy one and wear it to Kraken Junior’s next school play. In fact, I’d be chuffed to fuck that the bathroom splatter than I have to endure every 28 days was no longer a subject matter that made the nation dry heave. Yet it has not been produced by such a company. It’s been produced by American Apparel and that makes it as valid as a drying dog-turd on a canal towpath.

So as much as I adore that my monthlies will now be discussed in pubs and care homes, I don’t adore that it’s only being done for shock value. This development doesn’t represent an awakening of society, it represents American Apparel’s ongoing culture of using women’s bodies to make money.  Unless the company’s next campaign involves t-shirts that show men having a wank or women in a position of power, this t-shirt will be consigned to the same bin as all of its other examples of sexism. Empowerment, my arse. Or should I say bleeding vag.

What do you think of this post?
Fucktastic (14) Interesting (4) Meh (0) Boring (0) Shite (2)
This entry was posted in Culture, Public, Sexism and tagged American Apparel. Bookmark the permalink.