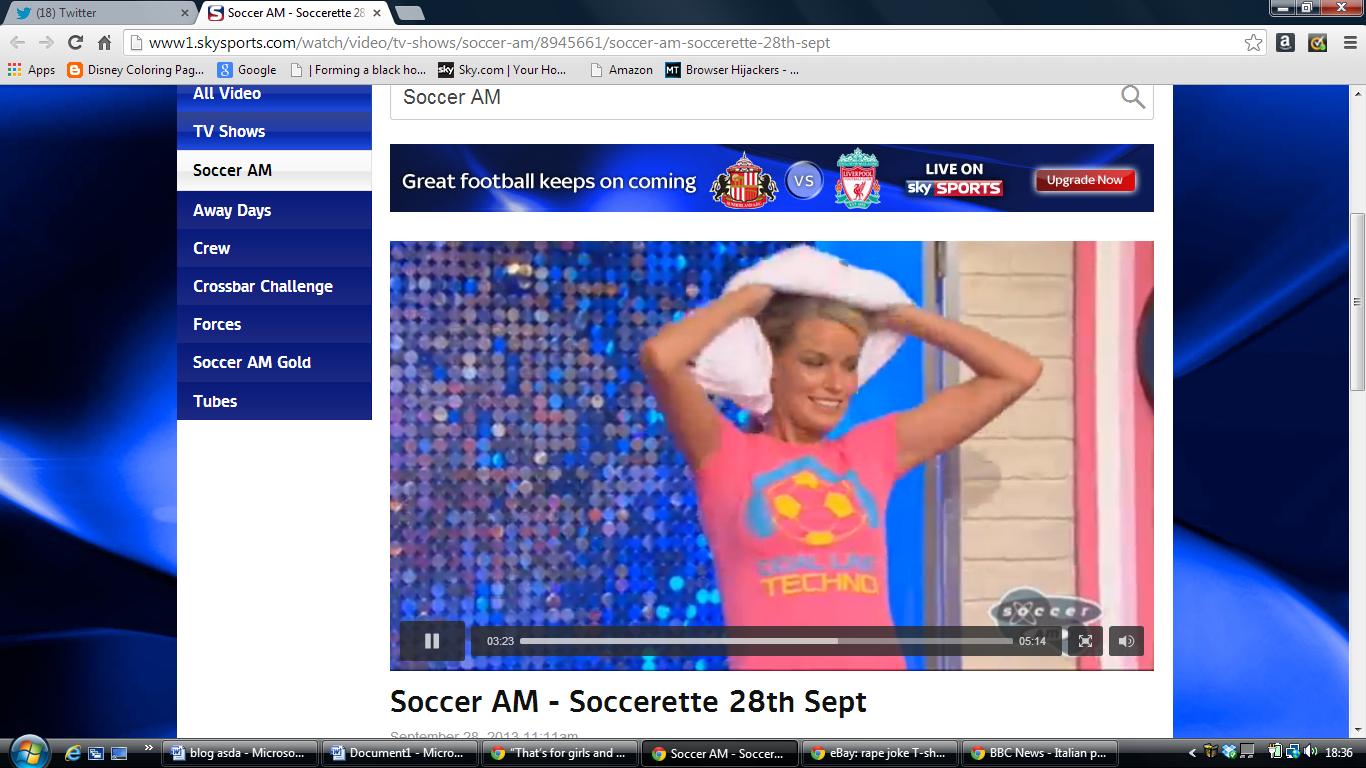 Whoa there, kraken-lovers! You see, this weekend I discovered something more staggering than Bruce Forsyth attempting to read his Strictly Come Dancing autocue. Flagged up by Child Eyes, which campaigns to stop sexualised images being displayed at child height in shops and public spaces, had I seen it at breakfast time when it was broadcast I would have poured rum on my Shreddies. Yup, that’s what happens when I get exposed to Sky Sports’ Soccer Am and the portion of the show called Soccerette.

Now, I know that this has been weekly fodder on Soccer Am, a Top Gear-style show for spitters, for donkeys but this is the first – and, by fuck, the last – time I have ever seen it. The show bills itself as a mix of comedy and football, in amongst which is a wormhole dragging the audience back to a time when men thought women were sluts because they showed their ankles in public. That’s Soccerette for you, where a model is brought on in a football shirt before being asked such questions as ‘how old are you?’ and ‘are you single?’ after which she takes off said top to reveal a tight pink t-shirt. She then walks a catwalk while a group of men watching her whistle, holler and howl like dogs with snagged cocks.  And the entire time this is sicking itself up onto the screen, in the background is a life-size, profile silhouette of a woman with Farrah Fawcett hair (that’s how outdated it is) holding a football inches away from her oversized tits.

And – get this – the show is presented by one Helen Chamberlain. Yes, a woman sits back and watches other women being treated like monkeys in a bloody zoo. Add to that the alleged comedy element of the show and that gives millions of men an excuse to tell female dissenters that when said comedy and a female presenter collide Soccerette can’t be sexist at all. The problem must be in our lack of humour, hormones or need for a decent shagging.

Why, in the dribbling ballsacks of under-schooled twat-baskets is this even on TV? It’s no wonder women’s football is never taken seriously. That’s because every time a woman takes a shot the blokes watching her wonder what she’d look like in the tiniest t-shirt this side of a Barbie convention. And yeah, I know that the show is predominantly about Premier League footy so has little room for female football but that doesn’t mean it needs to act as if women are to the sport what Bernard Manning is to the wellbeing of mother-in-laws.

In fact, one moment during this particular Soccerette feature told me everything I need to know about Soccer Am’s attitude towards women. Before whipping off her top, the model in question had to answer this-or-that questions such as ‘Puncheon or luncheon meat?’, about as basic a quiz as you can get outside of a day nursery. Yet even the model had to tell the presenter “I’m not stupid” when he patronisingly tried to explain it to her.

You know, it’s no wonder women still get subjected to the type of catcalling that fuels The Everyday Sexism Project. That’s because a mainstream television channel doesn’t just endorse it, it actually participates in it and attempts to make it look like normal behaviour. The problem is that it’s not bloody normal, is it? Not when The Everyday Sexism Project reports how young schoolgirls are being asked to show their tits to white van men or how builders aggressively block the way of women in the street and ask for blow jobs.

Worse, it increasingly makes football stands no-go areas for those women who love football. The clubs can bang on as much as they want about football being a family pursuit but when mothers, sisters and daughters are treated like cock-fodder by the show that millions of football fans watch before they travel to a game, I’d say a crowd of 80,000 blokes jacked up on chants and testosterone is the last place they want to be. Then there is what Soccer Am tells kids who are footy fans. It’s broadcast at 10.00 am when it’s piped into the homes of hundreds of thousands of families, families where the boys learn that it’s OK to treat girls like sex objects and where girls learn that they are valued for their body parts more than any other aspect of their personalities.

Sadly for the sport in its entirety, Soccerette doesn’t just prop up the outdated stereotypes that surround women. It perpetuates the stereotype that all male football fans are wank-fisted, grunting and to thick too mingle socially. I know that’s not true but Soccer Am doesn’t. That’s why it’s not just women who should be offended by the show, it’s men too. Unless said men are happy to go on being treated as if they can’t see past their next fist fight then it’s time for them to call for an end to Soccerette too. I’d say that when you look at it like that Soccer Am has scored an own goal, wouldn’t you?

What do you think of this post?
Fucktastic (20) Interesting (4) Meh (0) Boring (1) Shite (6)
This entry was posted in Culture, Personal, Sexism and tagged football, Soccer Am. Bookmark the permalink.

One Response to Balls