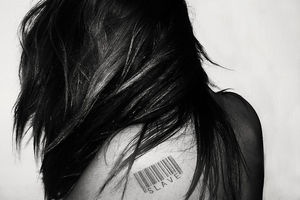 You know what, kraken-lovers, I had a brief Twitter chat on Saturday night (see, I am capable of talking as well as screaming) which reminded me of something that has sent me even closer to the crumbling edge of the clifftop that stands betwixt sanity and derangement. In fact even though this incident occurred ten years ago I still have momentary fantasies about sharpened chopsticks and bollock dissection. That’s because one day, while walking to work, a strange man felt compelled to tell me to “Smile, love!”.

What a festering fucker of fuckerish festerment. There I was at a pelican crossing waiting for the traffic to stop when a man in a white van (excuse me stating the obvious there), who had stopped at said light, leaned out of his window to tell me to jump to his screeching tune. Well as you’d expect I duly told him to go fuck himself and wandered on my way. Yet even though the incident ended there, over and again I’m forced to wonder why so many men think that telling random women to perform like circus seals is actually acceptable.

Now, before you tell me that this is harmless, I’m here to tell you that it as sure as shit is not. That’s because when bloke tells a woman to “Smile, love!” what he’s really doing is attempting to assert his control over her for his own cheese-covered stiffy and testosterone-fuelled satisfaction. And that’s exactly how I felt at that pelican crossing, that regardless of who I am or what was going on in my life at that time, my priority should have been to make the world a more pleasant place for a man I didn’t even know. It’s as if these guys think that exactly half of the population is a living, breathing song n dance troupe just awaiting an instruction to can-can.

Now these men, or as I like to call them ‘tombolas of ignorance, drying thigh-spaff and lemming shit’, never see this as harassment. Worse, when told that it is harassment they inform we women that we are bitches, need a sense of humour or deserve a hard shag. You know, because their unprovoked, unwarranted and unwelcome demand isn’t nearly as violating as our refusal to do it with a click of the heels and a salute. It’s the equivalent of me randomly telling passing men to “Twerk, love!” but when they quite rightly don’t, take such grievous offence that I call them impotent fridge humpers who deserve to be intruded upon with one of Satan’s many and varied flaming todgers.

Worse, if a man tries to enforce in public his prurient demands upon a woman he doesn’t even know, then what in the fuck is he willing to enforce in private? On the street it might be a smile but in his own home it might be anything else your imagination can dredge up. And that’s what’s uppermost in women’s minds when they get told to grin like meth-addicted monkeys, that if they don’t do as they’re told then this guy is infinitely capable of demanding more. All he has to do is get his victim alone and it’s downhill all the way, right to a police interview room and a DNA swabbing she’ll never forget.

Yet, the only way I’m going to listen to a random bloke when he clicks his fingers is if he’s begging me to call 999 because his large intestine has just slopped out of his arse and into the road. Anything even vaguely less urgent than that will be rewarded with his detailed re-understanding of the English language and quite possibly a re-understanding of what his penis is capable of when it’s wrenched at a 90 degree angle. That’s because, as a 42 year old woman, I am a thousand things but a puppet for a fucking stranger isn’t one of them.

And for once this means that as a woman with Bells Palsy, facial paralysis which means only the right side of my face displays a smile, any wank-wisket who attempts to demand a grin will get something decidedly uglier. Although how fucked up is society that my being wonk-faced is actually an advantage? Surely there must be less drastic ways of preventing men from acting as if I’m a mere extension of their pestilent minds.

So while I don’t largely have a problem with men telling me they like how I look (unless they do it with a leer or while they have their cocks in their hands) I do have a problem with them telling me how I should look. All of which is why I’ll be ready for the next demand that I “Smile, love!” and, believe me, it won’t just be my face that’ll be ugly. It’ll be the fact that it’ll take an entire police force to pull me off the fucker.

What do you think of this post?
Fucktastic (22) Interesting (0) Meh (1) Boring (1) Shite (2)
This entry was posted in Culture, Public, Sexism and tagged harassment, smile. Bookmark the permalink.

5 Responses to All Mouth